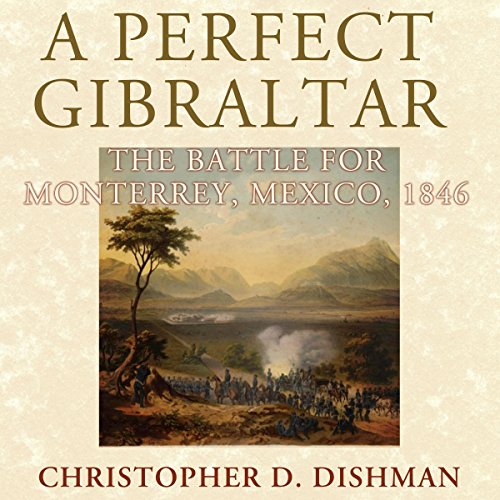 By: Christopher D. Dishman
Narrated by: Donnie Sipes
Try for $0.00

For three days in the fall of 1846, US and Mexican soldiers fought fiercely in the picturesque city of Monterrey, turning the Northern Mexican town, known for its towering mountains and luxurious gardens, into one of the 19th century's most gruesome battlefields. Led by Brigadier General Zachary Taylor, graduates of the US Military Academy encountered a city almost perfectly protected by mountains, a river, and a vast plain. Monterrey's ideal defensive position inspired more than one US soldier to call the city "a perfect Gibraltar".

Chris D. Dishman conveys in a vivid narrative the intensity and drama of the Battle of Monterrey, which marked the first time US troops engaged in prolonged urban combat. General Taylor engineered one of the army's first wars of maneuver at Monterrey by sending the bulk of his troops against the weakest part of the city, and embedded press reporters wrote eyewitness accounts of the action for readers back in the States. Dishman interweaves descriptions of troop maneuvers and clashes between units using pistols and rifles with accounts of hand-to-hand combat involving edged weapons, stones, clubs, and bare hands.

"Impressively researched, readable, and rich in the human element, A Perfect Gibraltar is a welcome addition." (John S. D. Eisenhower, author of So Far from God: The U.S. War with Mexico, 1846–1848)
"I recommend this important work." (Timothy D. Johnson, author of A Gallant Little Army: The Mexico City Campaign)
"Dishman takes the literature of the field to a new level by offering readers the short, quality battle study they expect from Civil War authors. His work should appeal to both the general reader and the scholar." (Richard Bruce Winders, author of Mr. Polk's Army and Crisis in the Southwest)

What listeners say about A Perfect Gibraltar

Dishman does a fantastic job of storytelling about one of the most critical and oftenly overlooked points in American military history.

It may he helpful to get a Spanish speaking or at least Spanish knowledgeable narrator if your book is going to be dominated by Spanish locale and names. Not to mention his pronunciation of "huzzah" which I've never heard as hoo-zah before. A bit monotonous in the delivery.