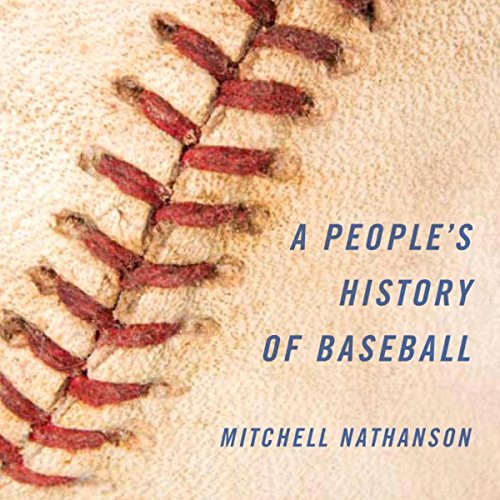 A People's History of Baseball

By: Mitchell Nathanson
Narrated by: Robert J. Eckrich
Try for $0.00

In A People's History of Baseball, Mitchell Nathanson probes the less well-known but no less meaningful other side of baseball: episodes not involving equality, patriotism, heroism, and virtuous capitalism, but power - how it is obtained, and how it perpetuates itself. Through the growth and development of baseball Nathanson shows that, if only we choose to look for it, we can see the petty power struggles as well as the large and consequential ones that have likewise defined our nation.

By offering a fresh perspective on the firmly embedded tales of baseball as America, a new and unexpected story emerges of both the game and what it represents. Exploring the founding of the National League, Nathanson focuses on the newer Americans who sought club ownership to promote their own social status in the increasingly closed caste of 19th-century America. His take on baseball’s racial integration that began with Branch Rickey’s "Great Experiment" reveals the debilitating effects of the harsh double standard that resulted, requiring a Black player to have unimpeachable character merely to take the field in a Major League game, a standard no White player was required to meet. Told with passion and occasional outrage, A People's History of Baseball challenges the perspective of the well-known, deeply entrenched, hyper-patriotic stories of baseball and offers an incisive alternative history of America's much-loved national pastime.

What listeners say about A People's History of Baseball

Drab history of the least fun aspects of baseball

Using an overly verbose and showy prose, A People's History of Baseball drags the reader through the class struggles, racism, economics, politics, and litigation that surrounded baseball for the past 150+ years. Rather than revealing an engaging new set of facts surrounding the underbelly of baseball, the author spends a great deal of time conjecturing on the motives surrounding baseball's biggest moments. A somewhat valuable exercise, perhaps, but does little to "[probe] the less well-known but no less meaningful other side of baseball." I bought the book looking for a behind-the-scenes look at the less reputable side of pro ball. Instead I got all the same stories told over again with all of the fun squeezed out of them.