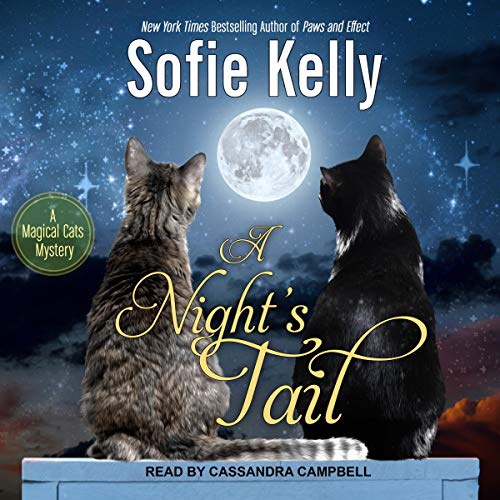 By: Sofie Kelly
Narrated by: Cassandra Campbell
Free with a 30-day trial

In the charming town of Mayville Heights, librarian Kathleen Paulson and her two cats pounce on clues to catch a killer, in the 11th installment of this New York Times best-selling series.

Spring is coming to Mayville Heights, and Kathleen's brother, Ethan, has arrived in town with his band, The Flaming Gerbils. But not everything goes as scheduled when one of Ethan's bandmates gets into a fight with a man interested in investing in the town. When the businessman's body is later found, Ethan's friend is implicated in the crime.

Kathleen wants to help her brother by solving the case, but she has no shortage of suspects from which to choose. Prior to his death, the investor was fighting like cats and dogs with lots of people. If this librarian wants more than a whisker's chance of solving the case, she will need to rely on her trusty feline sidekicks, Owen and Hercules.

What listeners say about A Night’s Tail

Having listened to all 11 books to date I can't wait for the next book. As a cat owner of 13 cats myself, I love the antics of Owen and Hercules. I love the merps and noises they make and I just plain love the stories with cats as stars.

I have followed this series since book 1 & enjoyed each of them. That being said, I’ll admit that the ending of this book has me excitedly waiting for the next edition of the Magical Cats series. I don’t like spoilers so I won’t go into detail. So if you want to know what has happened, you just need to read the book. Great job @ keeping your readers in suspense Ms. Kelly!

Please tell me there will be more episodes of this charming "tail". I really love all the characters in this series. I want to know if Kathleen and Marcus get to matrimonial bliss. Cassandra Campbell is a wonderful narrator. I love the sounds she makes for the Owen and Hurcales.

Another win for Sofie Kelly. This series is so entertaining. Love those magical cats! Bravo

Yes, finally......spoiler, warned if not read the book

I missed Owen, Hercules, Micah, and their human guardians. The storyline flows smoothly and as always, love that the cats are helping to solve a murder case! I feel like I’ve known these characters for while now. The book ends with a cliffhanger but am so glad the secret superpower is out of the bag..... cannot wait for the next book! Well done. Cassandra Campbell’s reading style is also fantastic!

Loved the story and the narrator was good as well. The audio on the other hand, left something to be desired. I experienced quite a few instances of repeated lines, crackling, and audio drop out. While I could still get the jist of the story, it's not why I buy audio books. I buy them to HEAR the story, told by someone who sounds like they are enjoying it as well. Again story:5 stars. Narrator:4 stars, Audio: 2 stars

Fresh and clean with lots of caffeine!

So delightful to listen to a sweet, clean book where no one wants to even swear around the main character. Why? She is just so good! I also appreciate good grammar! Well, she is a librarian. She also has a coffee addiction and two groovy cats!

This is a very entertaining series with well developed characters and an interesting plot. I look forward to the next book. I can't wait to see how Marcus adjusts his mind to Kathleen's news.

Probably the best yet.

Kelly has outdone herself with this one. The continued character development is as spot on as ever, and the plot flows smoothly from start to finish. So well so that you don't even realize you just spent all day doing nothing but listening to one book. I can't wait for the next one to see where things go from here.

This is a great series for people who like light hearted mystery and magic. The magical cats, Owen & Hercules, use their special powers and super cat intelligence to help solve mysteries, get into mischief, and satisfy their voracious appetites! Great listening! And Cassandra Campbell does the narration perfectly!