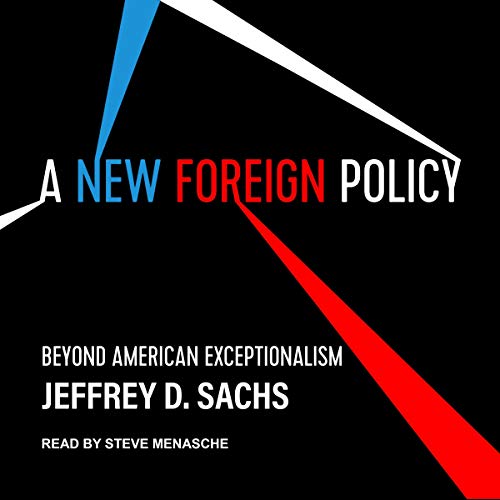 By: Jeffrey D. Sachs
Narrated by: Steve Menasche
Try for $0.00

The American Century began in 1941 and ended on January 20, 2017. While the US remains a military giant and is still an economic powerhouse, it no longer dominates the world economy or geopolitics as it once did. The current turn toward nationalism and "America first" unilateralism in foreign policy will not make America great. Instead, it represents the abdication of our responsibilities in the face of severe environmental threats, political upheaval, mass migration, and other global challenges.

In this incisive and forceful audiobook, Jeffrey D. Sachs provides the blueprint for a new foreign policy that embraces global cooperation, international law, and aspirations for worldwide prosperity - not nationalism and gauzy dreams of past glory. He argues that America's approach to the world must shift from military might and wars of choice to a commitment to shared objectives of sustainable development.

A New Foreign Policy explores both the danger of the "America first" mind-set and the possibilities for a new way forward, proposing timely and achievable plans to foster global economic growth, reconfigure the United Nations for the 21st century, and build a multipolar world that is prosperous, peaceful, fair, and resilient.

I watched a video by the author on YouTube's BigThink channel and was so impressed that I pre-ordered this book. Unfortunately, that positive impression has been let down severely. The author has excellent analysis of historical events taken from the view of an Internationalist; analysis which I find enlightening as an American Exceptionalist and which has caused me to modify some of my foreign policy positions. However, there are far too many anti-Trump moments in this book given the length of the decline versus the tenure of Trump.
While I do not agree with the Internationalist perspective, I found the analysis refreshing when it wasn't apologetic or naive about human nature as it pertains to nation's/countries/tribes vs The Other. The book is far more persuasive in analysis of how/why American Exceptionalism has declined or is destructive in other parts of the world. An example is on the African continent where we are pursuing the GWOT while China builds infrastructure and trade deals with many of the nations on it.
Where this book falls, awkwardly and embarrassingly, is in insulting Trump and disproportionately affixing responsibility to his regime while glossing over or lightly brushing on the impacts of foreign policy decisions from the Obama or Clinton administrations; the disastrous impact of Bush 43's nation-building exploits are widely known. To further clarify the author seems disproportionately focused on the impact of Trump's rhetoric and decisions in his 2yrs in office vs the prior 24yrs of American presidency, 2/3rds of which were dominated by the center-left leadership to which the author defers in his analysis. This is distracting and cheap, in my opinion, and undermines the credibility of his many salient points. What kind of center-right or GOP supporter would be swayed by a book which insults them by extension of their vote for change in 2016?
If the author had used the same brush to paint the Trump administration with the same strokes as it did prior administrations, it might have been more enjoyable and thoughtful. But in an era where many Americans are suffering from pro-/anti-Trump fatigue in the media, this book defaults too often to more of the same exhausting rhetoric. Lest anyone assume from I am a Trump supporter, I am a Libertarian Hawk and voted for Gary Johnson in 2016.