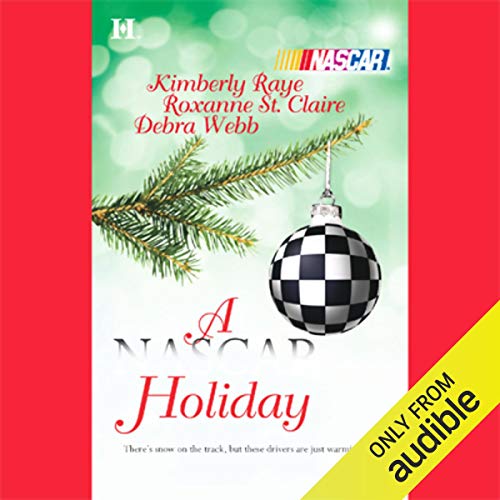 Ladies, Start Your Engines
Written by Kimberly Raye and read by Elenna Stauffer
All Savannah Calloway wants for Christmas is a chance to prove her talent with an engine...and hot young NASCAR driver Mackenzie Briggs is ready to play Santa. But they soon find that winning the race isn't nearly as important as winning each other's hearts.

'Tis the Silly Season
Written by Roxanne St. Claire and read by Lauren Davis
NASCAR Busch Series racer Clay Slater needs a ready-made family (fast!) to impress a potential sponsor. Lisa Mahoney can't resist the chance to give her kids the storybook Christmas she's never been able to, and if that includes a kiss under the mistletoe, so much the better!

Unbreakable
Written by Debra Webb and read by Alyson Silverman
Although she's been hired to prove that drivers are serious athletes, Dr. Maxine Gray doesn't think much of NASCAR racing. So in the spirit of Christmas, driver Rush Jackson is determined to show the good doctor the "rush" that racing, and race car drivers, can bring.

©2006 Kimberly Raye, Roxanne St. Claire, and Debra Webb (P)2006 Audible, Inc.
All rights reserved including the right of reproduction in whole or in part in any form. This edition is published by arrangement with Harlequin Books S.A. All characters in this book are fictitious. Any resemblance to actual persons, living or dead, is purely coincidental.

Love Christmas, and "A Nascar Holiday" gave three good heart touching stories, that make you feel better for reading. Really like Audiobooks, just wish they had more Christmas/Holiday stories.
I start reading and listen in early November.
Helps put you in a great spirit after reading a good Christmas story.