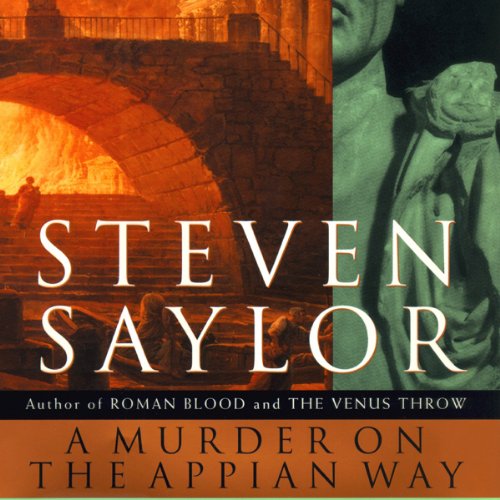 A Murder on the Appian Way

By: Steven Saylor
Narrated by: Scott Harrison
Try for $0.00

Ancient Rome has been in a state of turmoil as the rival gangs of Publius Clodius, a high-born, populist politician, and his arch-enemy, Titus Milo, have fought to control the consular elections. When Clodius is murdered on the famed Appian Way and Milo is accused of the crime, the city explodes with riots and arson, and even the near sacrosanct Senate House is burned to the ground.

As accusations and rumors fly, Gordianus the Finder, whose famed investigative skills and integrity make him sought after by all sides in the escalating conflict, is charged by Pompey the Great with discovering what really happened. Who is really responsible for Clodius' death? And should his murderer be despised as a villain or hailed as a savior of the Republic?

"In Steven Saylor's lively imagination, Rome - both glorious and grimy - is revived." ( Seattle Times)
"The plotting is deft and the action - both physical and intellectual - is nonstop." (Amazon.com)

What listeners say about A Murder on the Appian Way

I love Steven Saylor's books, I have read them all. So I was delighted to see this audio book in the Audible collection.

Unfortunately, I didn't check out the reader before purchasing the audiobook. The thought didn't even cross my mind as I am so use to having good readers on Audible.

The reader has a boring voice completely lacking any depth. He is unable to create different characters so I am constantly in doubt as to who is talking. Finally, his delivery is mechanical without any of the suspense or mystery that a good reader can offer.

My advice is to check out the audio sample for yourself. As for myself, I will stick with the actual books until a new reader comes through.

the WORST cold read EVER!!!!

I am a major Steven Saylor fan. Love the work. You can not imagine my disappointment upon hearing the DRY, Cold read by Scott Harrison. He pauses between every sentance as if figuring out the next words. Fraught with misspronounced words, and half assed characterizations, I just could NOT listen any more. I WANT MY MONEY BACK!!!!!

An older actor with a little gravitas is needed.

Actually, it was for me.

What was one of the most memorable moments of A Murder on the Appian Way?

He sounded like a San Francisco bistro waiter. But seriously, Novels set in Rome are inherently alien. I think British actors are best at this as they impart enough separateness while being understandable. We are all now used to hearing Romans portrayed as British via I Claudius, etc. that it is oddly more natural.

If you could play editor, what scene or scenes would you have cut from A Murder on the Appian Way?

None that I can remember.

I would have given this a 5 but for the narrator, Scott Harrison. He simply is one of the worst readers I have ever encountered. He not only tends to read with little expression, but he often mispronounces words which is very annoying. The fascinating story is a great look at Rome on the eve of the coming of Julius Caesar. It gives an excellent view of Roman Society and customs as well as providing an excellent mystery -- although the mystery portions are really seconday to the narrative of civil disorder in Rome.

The narrator fails on some many accounts. Not only is he basically a monotone, but he unable to make the characters come alive with his voice. His female characters all sound as if they were hoarse. It is too bad that this will never be redone as it an excellent book. I am sorry that Scott Harrison is the narrator in so many of the Saylor Roman Mysteries.

If you can ignore the reader, as I did, this book is still worth it.

I had started reading this book and got busy with other things so I thought I'd give the audio a try. Not sure I can make it through though. This narrator is worse than a synthetic voice. Mispronunciations, wooden, no characterization, akin to listening to a first grader struggle through. Maddening, absolutely maddening. I should have paid attention to the other reviewers. If there were a 0 star option for performance this would get it. Hope the gentleman hasn't quit his day job.

Love the series but hate this narrator

I've read or listened to every book in the series up to this point and love the narration by Ralph Cosham. This narrator, Scott Harrison, is so bad that I quit listening and got the written version instead. He is way too shrill, making Gordianus sound angry and harsh most of the time. He mispronounces Grodianus (says "Gordi- Anus" instead of "Gordiahnus") and generally is impossible to listen to. Stick with the Cosham readings, you will have a much better experience. The stories are wonderful and the history blended in seamlessly. It's really too bad that this narrator mars the experience so badly.

Painful to listen to.

The narrator- I've read cookbooks he could read.

Its was painful. His narrating sucked. "See Jane. See Jane run. Run Jane run. " That is how this entire book feels.

Very disappointed. This is the only Steven Saylor book I have listened to but it was so difficult to make it through because of the narrating I don't think I will get another.

The reader does a great job

I almost didn't buy this book because of the reviews about the narrator but he does a really good job! I don't understand why there are so many negative reviews. This is also a great book. Maybe the best one so far. It kept me entertained but I am obsessed with learning about ancient (2,000+ years ago) history.

Very culturally and historically accurate novel that explains the murder of Clodius very realistically. I only wish that someone had told the reader how to pronounce Latin names.

"Gordianus the Finder Series" is a blast. If you want to put a smile on your face and step out of your worries, buy this series. It's better than medications. I wish they had all the series. Start with the first book and enjoy.