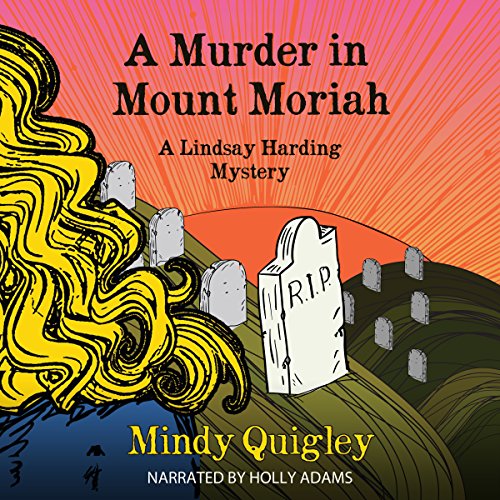 A Murder in Mount Moriah

By: Mindy Quigley
Narrated by: Holly Adams
Try for $0.00

For hospital chaplain Lindsay Harding, facing death is part of the job. After all she spends her working days comforting sick and dying patients. But when the annual Civil War reenactment in her hometown of Mount Moriah, North Carolina, produces a real casualty, the Grim Reaper suddenly gets a little too close for comfort. With the clock ticking, the police struggle to unravel how and why a beloved local reenactor was shot in front of hundreds of onlookers. As fingers point and tempers flare, another victim ends up laid out on Lindsay's front porch.

Lindsay's life is in danger, but her efforts to expose the century-old sins that lie at the heart of the mystery are undermined by her disastrous love life, her no-good mother, and a ninja-like squirrel - not to mention the small matter of a dangerous killer who'll stop at nothing to keep a sinister secret. Will courage, curiosity, and Lindsay's irreverent brand of religion be enough to catch the killer before she becomes the next victim?

What listeners say about A Murder in Mount Moriah

This was a fast, fun listen – obviously, from my five-star rating, I loved it. It did everything a cozy mystery ought to do: It introduced a main character who isn't Sherlock Holmes but isn't an idiot, is a strong woman but isn't Wonder Woman, is a career woman without being in the food industry … Lindsay Harding is a hospital chaplain, and really, that's a great way to throw a character in the path of otherwise improbably frequent mysterious deaths, isn't it? She's devout without proselytizing, effective, and very, very human. I like her a great deal.

The narration by Holly Adams was perfect for the book and the character. She is now on my list of readers to search out.

The writing is sharp, and funny – not infrequently laugh-out-loud funny, and that's uncommon. Lindsay has a depth to her that I didn't expect, so that alongside the LOL's there were also moving moments. And then would come something like the squirrel, and it would be back to giggling again.

And what a great beginning.

I received this via Audiobookblast.com in exchange for a review. With thanks!

Reenactments Can be Deadly

Would you listen to A Murder in Mount Moriah again? Why?

Yes, and I have listened to it a couple times.

What other book might you compare A Murder in Mount Moriah to and why?

I think the overall story stands alone, in all categories.

Have you listened to any of Holly Adams’s other performances before? How does this one compare?

Holly was a great narrator and this is the first but hopefully not the last time I will hear her.

There were lots of very funny laugh out loud parts of the book, but as far as moving me, I would say it was a touch and go situation when Lindsay was forced off the road into the water.

Such an excellent book and I hope to hear more from Mindy Quigley. Quigley's writing is original and she has a great sense of humor.

I LOVED this book!It had just the right amount of murder,mystery and romance!Lindsey is a hospital chaplin who gets herself mixed up in a murder investigation.She had a crappy childhood and everything she does seems to backfire on her.
Holly Adams does a wonderful job of narrating this book.
"I was provided this audiobook at no charge by the author in exchange for an unbiased review via AudiobookBlast dot com."

Pleasant mystery without detailed gore. The story moves along well, and maintains the reader's interest well. Some behaviors and customs are more familiar to Southern readers, but this is not really a problem for others. The characters are clear and some of them are just too much fun! I really enjoyed it and will look for the others.
HA did a good job of delineating personalities and providing Southern accent, but just a bit too hammy for my taste.

How could a hospital chaplain get in so much troub

I loved this book. It was entertaining with quirky characters, and a good plot. I would read other books by this author

One odd death after another

Years ago I listened to Book 2, A Death in Duck, and now I’m finally getting around to listening to Book 1. This was a fun book and a good introduction to Lindsay Harding. In fact, some of her origin story family stuff feeds into Book 2, so if you’re a bit of a completest, I would suggest reading the series in order.

Since Lindsay is a hospital chaplain, Christian religion is a feature in this book, though not so much in Book 2. I would call this story Christian Lit. There’s a few scenes where I felt the story was starting to veer a little into preaching, but it wasn’t so much that I wanted to put the book down. Religious literature of any kind isn’t my cup of tea, but Lindsay is such an interesting character that I kept on with the book.

Lindsay’s neck of the woods is sure full of characters! Rob made me laugh more than once. I love his snark, and he opens a window for other characters to explore some of the historical racism (and contemporary racism too) of the area, being Asian.

A Civil War reenactment is at the heart of the story, where one player was fatally wounded. But the hate doesn’t stop there as notes keep turning up spouting racist remarks about the newly deceased. I loved digging into the historical documents with Lindsay, uncovering something that could be a motive.

Then there’s the police. One cop lets her help out on the case, but things go wrong fast there. Then the boss cop, well, he’s pretty hard nose. I really wasn’t sure if he was going to cause more harm than good. Toss in an attractive, and available, doctor new to the hospital, and Lindsay has her hands full keeping the guys happy.

I really liked Lindsay’s back story with her parents, who have their own parcels of trouble. She spends much of the story hiding from them even though her dad keeps inviting her to his church events. Meanwhile, her mom is up to no good and that gives them all some little bit of grief later.

All around, it was a fun murder mystery with a good balance of suspense, regional flair, and humor. 4.5/5 stars.

The Narration: Holly Adams does a great job with this story. She’s got the perfect voice for Lindsay and I like how she approaches the sadder moments of the tale, where Lindsay has to give comfort or even spiritual advice. She also does a great job with Rob’s light Asian accent and his humor. I love Ana’s no-nonsense voice too. The pacing was perfect. I noticed 1 sentence that was repeated in the recording, but no other technical issues. 4.75/5 stars.

I received this audiobook from the narrator in exchange for an honest review. My opinions are 100% my own.

Cozy. Cute. Squirrely. My favorite mysteries are usually small-towns, female investigator, and one that would not be your typical choice to investigate. Mindy had just what I was looking for. I very much enjoy chaplain Lindsya Harding. She was someone that dealt with death and dying as part of her everyday. Now, she was in a role as investigator. The mystery was not overly complicated, but gave you just enough to get you wheels turning and you wanting to know more.
Narrator Holly Adams had the voice that could pull of mystery and still give you that feel of being right there as all the danger, suspense, and comedy took place. I found that this was a good start/introduction to a new series for me to look at.

*****
I received this audiobook as part of my participation in a blog tour with Audiobookworm Promotions. The tour is being sponsored by Mindy Quigley. The gifting of this audiobook did not affect my opinion of it.

This first book was quite a romp!

The first book in the Lindsay Harding series is quite a romp! Lindsay is such an adorable and likeable character. From beginning to end, reading this felt like being in an adventure.  Mindy Quigley couldn't have picked a better narrator than Holly Adams.  Quigley's humor matched with the narration of Adams was a perfect fit. That's why I love audiobooks! The voice creation brought so much more depth to the story than just reading it. There were several remarkable characters that had hilariously distinct accents. I loved it.

This was my first Mindy Quingley's book. This is the first book in A Lindsay Harding Mystery Series. This is a great introduction to this Series. Lindsay, the main character, is a strong and fun character. This cozy mystery is entertaining, filled with twists and turns. I'm looking forward to the next book in the Series. Holly Adams did a great job with the narration. She has the perfect voice for this cozy mystery. I was given a free review copy of the audiobook — at my request — and have voluntarily left this review.

A murder in Mount Moriah works really well as an Audiobook. Holly Adams reads it perfectly. The book is fairly lengthy and has a lot of detail. The author creates a town and a community for the reader to love. This works well as an audiobook however I’m not sure it would have been as interesting if I can read the book.

Lindsay is our main character and in the centre of a storm. During a war reenactment a man is killed. Now the history of the town will be called into question to solve the case.

Lindsay works as a chaplain and feels it’s her duty to find the truth. With twists and turns at every corner it’s time to discover a scandal worth murdering for.

This is available on Kindle Unlimited also and is part of a series. Our main character is looking for her own happy ending which I’m guessing will continue through the books.

4.5 stars out of 5. *I received an arc in exchange for an honest review.

ok , I only ever bought other book narrated by author .Don't do it . sorry Mindy ,do your books a favour , don't read them . I understand costs etc . Please don't do it . I cant see , and struggled listening to the drone . Had no idea who was who . writing ? book ? theme? from what I managed to put up with listening to , good .