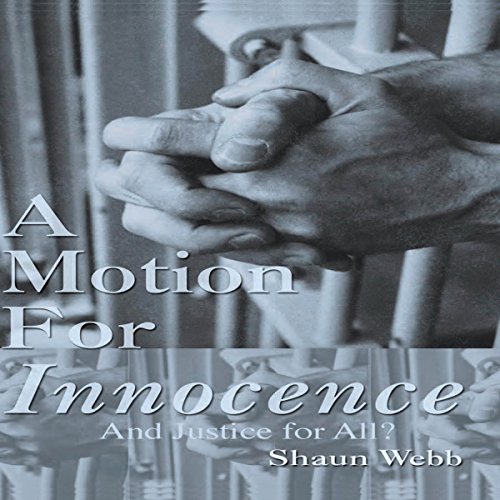 A Motion for Innocence

And Justice for All?
By: Shaun Webb
Narrated by: Steve Blizin
Length: 11 hrs
Categories: Politics & Social Sciences, Law
4 out of 5 stars 3.9 (10 ratings)

A Motion for Innocence

By: Shaun Webb
Narrated by: Steve Blizin
Free with a 30-day trial

It could happen to you! The judicial system has been on a downward spiral due to overzealous prosecutors, entitled judges, and privatization within the incarceration "industry." It is no longer "innocent until proven guilty," as much as it is a contest between two lawyers to see who reigns supreme. The defendants have become pawns in a giant game. Finances, not facts, often determine the outcome of cases.

In my story, Sean West finds himself in the midst of such impropriety. Accused of sexual misconduct that he insists never happened, it triggers a series of events that forever changes his life. When a 15 year-old girl steps forward with allegations of abuse, Mr. West has confidence that the judicial system will discover the truth and make the correct decision regarding his future. A judge who berates lawyers, a defense attorney obviously frightened by the judge and a prosecutor with a penchant for trying people with weak evidence turns Sean's trial into a circus. Sean finds that his faith in the judicial system was sorely mistaken as the trial plays out before him. Rather than a search for the truth, it becomes a mission to re-arrange the facts to fit the prosecutor's agenda.

A Motion for Innocence...And Justice for All? is a revealing story about the reality of justice in America today. Written in first person, this book takes the listener on a journey through the court system and beyond. It is emotional, traumatic and real. If you think it cannot happen to you, think again.

What listeners say about A Motion for Innocence

The Crime Was How The Case Was Handled!

Very compelling story. A man's life gets destroyed over a single accusation. Poor legal representation isn't that surprising but when the Judge shows up late then rushes the trial it's clear that a fair and impartial hearing is not possible, even in America.

Where does A Motion for Innocence rank among all the audiobooks you’ve listened to so far?

It's one of the best. You walk step-by-step with the accused. It's terrifying.

What other book might you compare A Motion for Innocence to and why?

Any courtroom true crime like this one is comparable. The story reminded me of something John Grisham would write.

What does Steve Blizin bring to the story that you wouldn’t experience if you just read the book?

He brings the story even closer because you feel like you are there in the courtroom feeling the emotion and pain.

I couldn't stop listening. The story was gripping throughout.

I highly recommend this book. I really enjoyed it and feel that it's a necessary listen or read. People need to realize what a shaky system of justice exists here in the USA.

Web's story is a study in frustration. I kept hoping that he would be liberated from his horror by a Deus Ex Machina miracle, but no such salvation was at hand. How galling that he was forced to pay with days of his life for a tissue of lies and nastiness.
My single criticism of the narrative is that it frequently assumes a preachy, strident tone.
It is an otherwise compelling story.