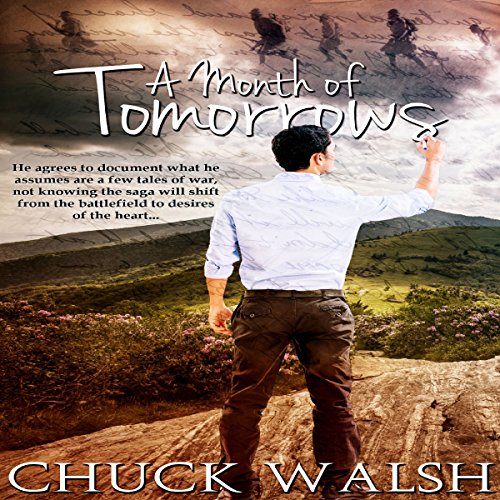 A Month of Tomorrows

A Month of Tomorrows

WWII hero Samuel Gable has weeks to live. Eighty-eight years old, his body ravaged by cancer, he's full of unrest for reasons that have nothing to do with the horrid disease. He has secrets to divulge, and local writer Pete Swift agrees to document what he assumes are a few tales of war. As Samuel recalls perilous days spent in the jungles of the South Pacific, however, Pete begins to live vicariously through Samuel's stories. A kinship grows as the saga moves from the deadly battlefield to one of the great love stories of all time, as Samuel recalls his love affair with Callie, the dark-haired beauty he fell in love with before being shipped off to war. Samuel's stories weave the past and the present, and the reasons for his unrest begin to unfold. Pete comes to learn that Samuel's son, Caleb, left home abruptly 30 years ago due to a tragic accident that ripped the family apart. Meanwhile Pete finds himself drawn to Samuel's daughter, Gabby, who moved back home to take care of her dying father. With Pete, Gabby has a shoulder to cry on and a diversion from the impending death that awaits her father. Their chemistry sets up a passionate collision course that threatens to undermine Samuel and Pete's relationship, not to mention Pete's marriage. Both Samuel and Pete are burdened by situation and circumstance but for entirely different reasons. Set in a backdrop of the Blue Ridge Mountains of Tennessee, these unlikely friends are in a race against time to heal the wounds of their hearts.

This story pulls on every heart string... you laugh, you cry and it takes you places you didn't expect but we're glad you went. Thank you

Would you listen to A Month of Tomorrows again? Why?

The characters in this book are wonderfully presented and the kind of people you'd love to know in real life. The story, as told by an old WWII solider to a man writing his memoires, is captivating, heartwarming, and sometimes sorrowful. The author is a true master at using a story within a story to take us back thru' time to experience love, faith, and hope for our tomorrows. There is more than one romance to enjoy as the characters go through experiencing the present and remembering the past.

What was one of the most memorable moments of A Month of Tomorrows?

Listening to the main character tell his story

It made me feel comforted and at peace