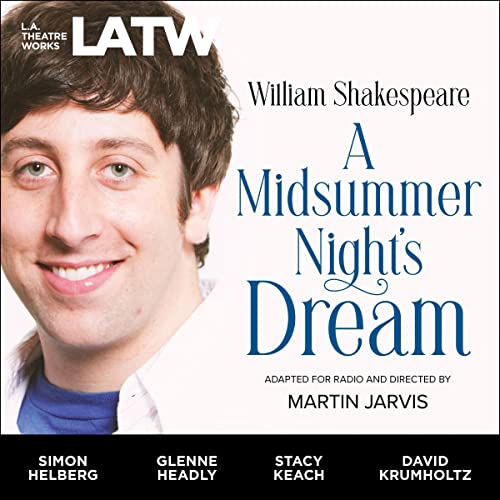 Shakespeare combined his love of theater with Greek mythology and the supernatural to create what is arguably his most playfully imaginative work. From love potions to bizarre transformations to the unforgettable play-within-a-play, A Midsummer Night’s Dream is a non-stop delight, and remains one of the milestones of the Bard’s canon.

Recorded at The Invisible Studios, West Hollywood, in February 2013.

Adapted for radio and directed by: Martin Jarvis

Jon Matthews as Cobweb and Mustardseed

Mixed by Mark Holden for The Invisible Studios, West Hollywood

What listeners say about A Midsummer Night’s Dream

I guess the setting is Athens, GA - Regional accents kick in rather jarringly right from the first lines and one almost distracting puzzle is trying to guess where each actor is pretending to be from (Is that Texan I hear? And there's Alabama) Still, it's a breezy production, albeit one with minimum poetry - It's also great fun to hear Stacy Keach, once renowned for his epic performance as Hamlet in Central Park, chew up the aural scenery as Bottom - Thank you Audible for including a cast list, something that's often missing in Audible pages

An Unbeatable Performance of a Legendary Piece

The voice actors really brought the play to life. You won't just hear people reading the script; they truly take on the mantle of each character and understand the essence of the lines.

The different voices really help in following the story. We listened to this in the car with our teens and they enjoyed it!