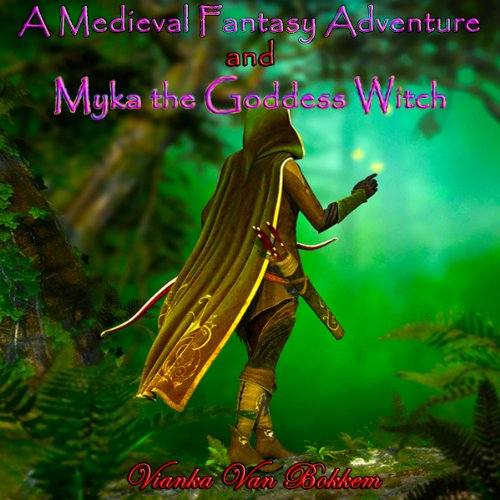 A Medieval Fantasy Adventure and Myka the Goddess Witch

By: Vianka Van Bokkem
Narrated by: Brie Carter
Try for $0.00

The view from this tall tree is kind of pretty. I can see salmon jumping on the river. Colorful birds are making their nests while they sing. The sky is clear this morning after a night of heavy rain. My name is Emma and I am a 16-year-old orphan with long brown hair that I braid every other day. My eyes are hazel like my mom's. My blue maiden dress is the only one I own. I am in charge of four siblings. Our parents died trying to protect us from a dragon attack and were killed instantly by the monster's lethal fire. I was not successful at hunting last night because I could not see anything with the rain.

My bow and arrows seemed to be drying faster than I was. I decided to go check a village and hopefully find someone who would feel sorry for me and feed me. While I was entering the village, a group of people were gathering around a sign that was being posted by a royal knight. His expensive uniform gave him away. "Young princess Victoria has been abducted by Amira the dark-magic sorcerer. The King is offering 100 gold coins to anyone who rescues her.” The reward was more than enough to feed my siblings for a long time. Will Princess Victoria's handsome teen brother, Prince Edward, interfere? Or are the two of us destined to fall in love during the rescue?

When the father of all gods, Zeus, discovered his beloved daughter Athena was pregnant with Apollo's baby, he ordered all gods and goddesses to keep it a secret because he wanted all mortals to believe Athena was an eternal virgin. The moment I was born Zeus gave me away to a loyal mortal "witch" named Maia which means "nursing mother". My father Apollo had to have a special magic spell done by Maia because he was the god of truth who couldn't speak a lie.

Zeus also asked Maia to cast a spell on my mother so she would not fight him when he gave me away. Maia lived in Mykonos, Greece and decided to name me "Myka". She was careful to cast the biggest magic spell on me. I was going to be a mortal girl until the day of my 18th birthday!

This could have been an excellent download but it is spoilt by its amateurish storytelling. If you can put up with this its worth a listen. The second story "Myka the Goddess Witch" is the best of the two.