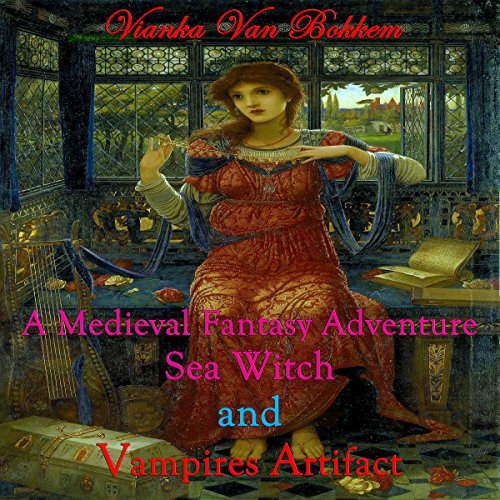 By: Vianka Van Bokkem
Narrated by: Amanda Friday
Try for $0.00

A Medieval Fantasy Adventure: "My name is Emma and I am a 16-year-old orphan. I am in charge of four siblings; our parents died trying to protect us from a dragon attack and were killed instantly by the monsters lethal fire. I was not successful at hunting last night because I could not see anything with the rain. My bow and arrows seemed to be drying faster than I was. I decided to go check a village and hopefully someone would feel sorry for me and feed me. While entering the village a group of people were gathered around a sign that was being posted by a royal knight. His expensive uniform gave him away."

Sea Witch: Empyrean's Legend: "Sitting on my favorite conch shell waiting for my friends Galene the Nereid of calm seas, and Doris the Nereid of seas bounty to arrive, I admired a flock of white birds flying around me. I live in a beautiful kingdom above the sea water called Empyrean. Empyreans live in identical four level castles in the middle of what Landers call the "Bermuda Triangle." Our homes were erected on top of 300 foot-high rocks with God Poseidon's permission. I am a Sea Enchanter named Siela. The tale that I am about to reveal contains all past events that led me to where I am right now. My tale includes revenge, friendship, deception, defiance, and love."

Vampire's Artifact: "My name is Nathan Jones and I am a vampire. Many years ago I was being chased by a vampire hunter. This hunter knew a lot about magic, but some of my vampire friends were hunting him in turn and he lost his wooden stakes. The hunter found my coffin, but because he didn't have a wooden stake to kill me with, he decided to draw a powerful angel spell with his own blood. Vampires are vulnerable to such a spell and I could not get out of my coffin until a girl named Libby erased the drawing. I was finally free to go back to 1886 with an artifact that I found in Egypt many years ago to save my young brother from a murderer with Libby's help."

What listeners say about A Medieval Fantasy Adventure, Sea Witch and Vampire's Artifact