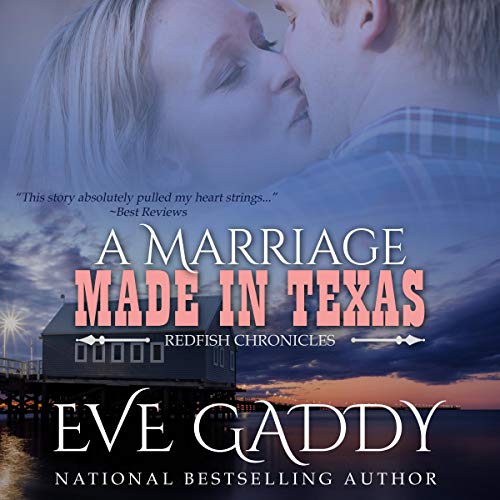 A Marriage Made in Texas: A Texas Coast Romance

By: Eve Gaddy
Narrated by: Jacki Swinford
Try for $0.00

Besides the slower, friendlier pace of a small town practice, the attractions drawing Dr. Jay Kincaid to tiny coastal Redfish, Texas, are his brother and his family — and the intriguing woman he’s never forgotten. Jay hit it off with fascinating single mom Gail Summers at his brother’s wedding five years ago. He soon discovers she’s just as pretty and even more alluring now than she was when they first met.

Having had to work hard to support herself and her two daughters after her husband walked out on them, Gail is wary — but tempted by the return of the handsome doctor. Still, a no-strings-attached affair with charming, smoking-hot Jay is just the treat she deserves — isn’t it?

Until an unexpected pregnancy brings their red-hot liaison to a halt. Determined to be there for Gail and their unborn child, Jay proposes, and reluctantly, Gail accepts. But can he convince her she can depend on this former free-wheeling bachelor to love and cherish her and her children…for always?

What listeners say about A Marriage Made in Texas: A Texas Coast Romance

I legitimately tried. I made it through the painful lack of research of the Corpus Christi area - combined with selective know-it-all medical parts - and even the really bizarre ex-husband drama along with MC’s weird lack of spine on somethings. The kind of gross intimate moments with the kids right there?!? I got all the way to chapter 18 and then the narrator started smacking her mouth and repeating section ... and repeating sections... and smacking.