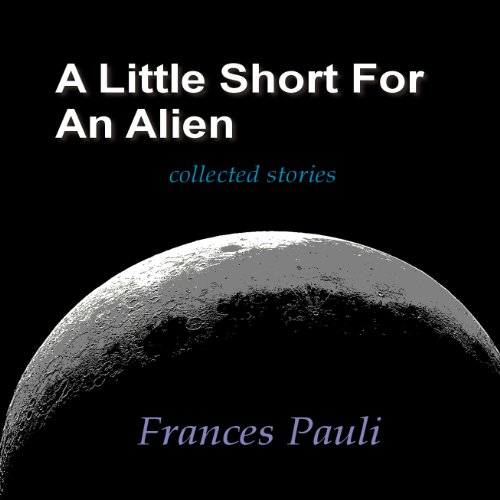 A Little Short for an Alien

A Little Short for an Alien

Six intergalactic short stories from author, Frances Pauli. From “The Fobidden Zone” to the “Alien-Human Relations Department”, these alien-infested romps explore encounters with a diversity of imagined species, scenarios, and space disasters.

Join Dylan Lowwater, lackluster employee at Space Station H22-J231; Jo Lorey, wayward musician desperate to communicate with a threatened race; and Lieutenant Commander Roe, just plain desperate, as they struggle against out-of-this-world obstacles. In a universe overflowing with tentacles and glow gin, sometimes adventure is easier to find than a date.

Would you listen to A Little Short for an Alien again? Why?

Yes. It was fun and it is a good length for a but of a commute across state lines.

The final story, Alien Embrace, was excellent! So poignant and the author left the ending up to the reader's interpretation.

What does Eric Vincent bring to the story that you wouldn’t experience if you just read the book?

The final story had me thinking for quite some time.

This collection of short stories consists of 5 pretty short pieces and 1 longer story. If I misspell any character or place names in this review, please forgive me as I was listening and not reading. Over all, it is a great collection and humorous, and sometimes serious, science fiction.

Lietenant Commander Roe has braids. It’s part of his thing, his personal identity. Unfortunately, you can’t climb the ladder in the space navy with long hair. You can, however, get your braids caught in the automated doors (which leads to having amused friends). This was a very amusing, short story that brought together braids, job insecurity, space jelly fish, and hopeful romance. And it did it well.

Rook & Tool are brothers. Tool and his wife recently were approved to breed. Rook chats privately with his brother about the Progressive Thinkers, who Tool thinks are all radicals. There is a secret mission to leave their place, explore the rest of the galaxy/universe, and find out if their race is still hated. Deet (a Progressive Thinker) is slated to go on this mission, but Rook will be sucked into help more than he initially signed on to do.

This story left me with lots of questions: Are these guys more machine than animal? Are they virtual beings trapped in a computer program? What will happen to their mission? It was well written but I hope there will be (or is) more to the story.

A bored paperpusher, Dylan, is stuck at work on the boring night shift. Nothing ever happens. He will be lucky to have just one worker pop on by for their regular drug screening. And then a huge ursine alien walks in, grunts a lot, and falls to the floor, her belly moving. Things just got a whole lot more interesting.

This was a very short story, and a classic tale, but it was still fun to watch Dylan go from whining about his boring job to trying to convince Medic to send some personnel to his office right away. It got more than 1 chuckle out of me.

Captain Jules as an ongoing argument with her spaceship’s AI as she struggles to win victorious over the attacking space squids. As we quickly learn, this is her avatar blinking in and out of the game.

Again, this was a really short story, and I also enjoyed it quite a bit. Enjoying my PC games, and also having spotty internet connections whenever it rains, snows, or is windy, I could relate to this. I was amused.

We are back with Dylan from the story Sector 7. Again, it is another boring night shift. He rustles through the shifts mail only to find that Medical’s mail has been delivered to him accidentally. Before he can work up the motivation to walk it up to them, something many-toothed and alien escapes from one of the packages and proceeds to climb up his leg. Of course, he rings Medical for immediate assistance and this leads to all sorts of embarrassment for Dylan and high amusement for me. This was probably my second favorite story in the book.

This was the prime jewel in this collection and my favorite. It is also the longest, so we got to spend the most time with the characters (and that is probably one of the reasons I enjoyed it a bit more than the others). Jo Lorey, a musician, has been brought out to this alien planet by the mining company. The mining management need to do their best to verify that the planet is not inhabited by any intelligent, self-aware, society-building species. Jo’s friend, Hillary has caught one of the Warblers (as the somewhat reptile/bird-like aliens are called) for observation. She has tried every way she knows how to attempt communication with it and has failed. However, they have noticed that the Warblers create a type of music. Jo is there to attempt communication through the music of her flute.

This was a beautifully written story that had a very poignant ending. Ah! I hope the best for Jo and the Warblers but fear the worse! Excellent story.

The Narration: Eric Vincent did a good job with the narration, having distinct voices for both the male and female characters. He also made some very interesting sounds for some of the aliens. I loved the distressed human noises he made at the appropriate times.

What made the experience of listening to A Little Short for an Alien the most enjoyable?

The different stories all were all humor and light hearted to read/listen to. Eric's voice compliments each story in the best way.

I don't know how or why, but Eric's voice fit the stories perfect for me. His voice held the dead pan humor in the best of ways. He didn't give anything away, but you knew the joke.

I laughed listening to all these stories.

I enjoyed all these reads for the fun they are. This is one I would say if you want to kick back and enjoy fun space reads. Do pick this one up, then just relax.