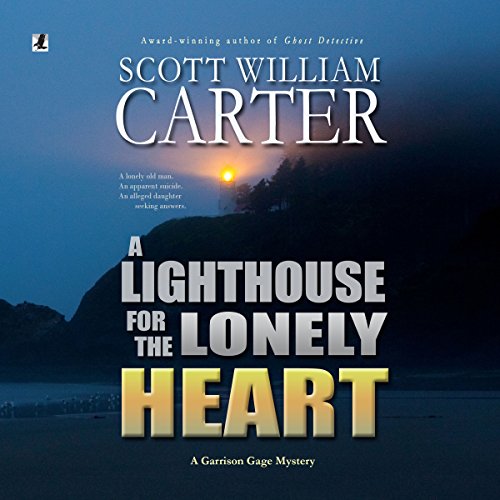 A Lighthouse for the Lonely Heart

They find his body at the bottom of Heceta Head Lighthouse - Ed Boone, a longtime volunteer who commits suicide rather than see his grim diagnosis to its bitter end. The strangeness of the old man's death makes the local news, but Garrison Gage thinks little of it until the famous Nora West sneaks into town with a strange letter in hand.

Professing he wants to go to his grave with a clear conscience, Ed claims to be Nora's biological father. But the revelation stirs up all kinds of complicated emotions for the talented but troubled musician, who hires Gage to find out the truth.

Yet the truth may be a lot more disturbing - and dangerous - than either of them are prepared to believe.

What listeners say about A Lighthouse for the Lonely Heart

Have listened to the complete series. Enjoyed this addition to the Garrison Gage Mystery series. Looking forward to Book 6, written by Scott William Carter and hopefully narrated by Steven Roy Grimsley.

EXCELLENT. ONE OF THE BEST IN THE SERIES.

Scott William Carter did it again. Fantastic writing and well performed by Steven Roy Grimsley. Intense and gripping all through. Kept me awake the whole night to complete the book. Layers upon layers of secrets that kept me guessing who is actually the bad guy and what is the motive behind it all. Lots of suspense and gripping tensions throughout. Very, very good. I hope there will be more books for this series.

Garrison returns to solve the mystery of a body found in the rocks at Heceta Lighthouse on the Oregon Coast. There's mystery, suspense, and lots of action, from fighting to romance. The return of familiar characters like Alex, the bookstore owner and Zoe, his adoptive daughter, lets you sink into this one-of-a-kind retired FBI agent's life. He's a rebel, sarcastic and witty, yet humble. The story unfolds amidst stunning descriptions of the gorgeous coastal landscapes. This character makes you wish he was real. Oh, and this book introduces Lady, a little dog who manages to unthaw the curmudgeon's heart. The narrator is excellent and performs male and female roles in a believable way! This book leaves me anxiously awaiting the next!