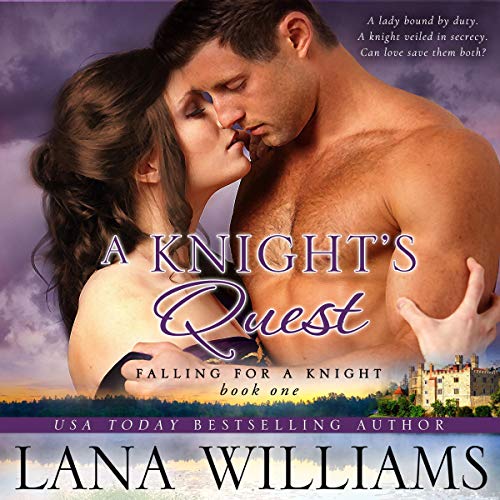 By: Lana Williams
Narrated by: Julian Pearson
Try for $0.00

A lady bound by duty. A knight veiled in secrecy. Can love save them both?

Lady Sophia struggles to gather the pieces of her life after the devastating attack on Berwick, Scotland, that tore her world apart. Now head of her family, she does all she can to keep them safe and help the people of her city regain what they lost. The arrival of an English knight raises her distrust, especially when he suspects her of stirring unrest.

Sir Garrick de Bremont's secret mission in Berwick is to seek out signs of discord. His quest should be simple, yet nothing comes easily in this troubled city, where no one is who they seem. The English are not welcome here, especially English knights, who laid siege to the city and killed thousands.

Sophia has no reason to trust this man, but her attraction to him is undeniable. When he helps protect her, she realizes this is a knight like no other. Though he is English and she is firmly on the other side of the border, he makes her long for things that cannot be.

Rebellion brews in this bustling market city. Can Garrick uncover the cause before he and Sophia lose not only their love, but their lives?

The first full-length audiobook in the Falling for a Knight series - grab a copy today!

What listeners say about A Knight's Quest

I thought this story was great. The characters and storyline were interesting and held my attention. The right balance of mystery, action and love. The narrator was very talented also. I received a complimentary audio and this review is voluntary.

This is a marvelous detailed audible.

This is a marvelous detailed audible. The details were so exact you could picture the scenes within your mind. The storyline was strong and the characters were fully formed and well rounded. The author intertwines history with the story making it believable; a job well done! There was action, intrigue, mystery, murder and of course there was romance. The h and H have many hurdles to overcome before they may find their happily ever after. I do recommend this audible/book.

I was gifted this audible as an ARC and this is my voluntary and honest review.

I enjoyed the mix of fact and fantasy. I want to read the entire series and more by this author.

What an interesting historical romance! Set in Berwick, Scotland two years after a massacre, our characters meet when Sir Garrick arrives to uncover a plot to create more unrest. One of his possible suspects in Lady Sophia who is actually struggling to keep her family safe and fed. it does not take him long to realise she couldn't be involved in any criminal activity, but apparently someone is determined to kill both of them. This is almost a historical enemies to friends romance except that Sir Garrick and Lady Sophia don't actually start as real enemies.

I enjoyed this audiobook. It was well presented and easy to listen to. In fact I got through it without realising the time had passed. I am now looking forward to the remaining books in the series because, aside from our two protagonists, there were other very interesting side characters with lots of hero potential.