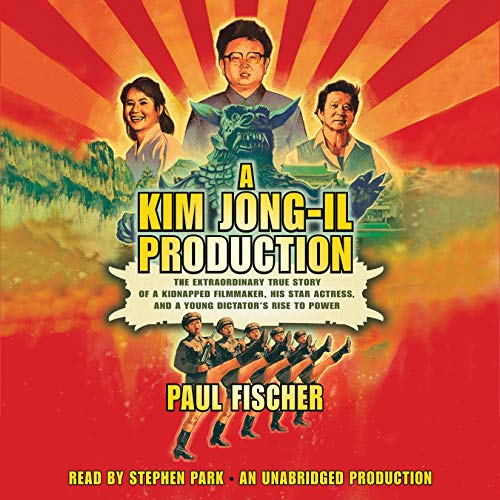 By: Paul Fischer
Narrated by: Stephen Park
Try for $0.00

Before becoming the world's most notorious dictator, Kim Jong-Il ran North Korea's Ministry for Propaganda and its film studios. Conceiving every movie made, he acted as producer and screenwriter. Despite this control, he was underwhelmed by the available talent and took drastic steps, ordering the kidnapping of Choi Eun-Hee (Madam Choi) - South Korea's most famous actress - and her ex-husband Shin Sang-Ok, the country's most famous filmmaker.

Madam Choi vanished first. When Shin went to Hong Kong to investigate, he was attacked and woke up wrapped in plastic sheeting aboard a ship bound for North Korea. Madam Choi lived in isolated luxury, allowed only to attend the Dear Leader's dinner parties. Shin, meanwhile, tried to escape, was sent to prison camp, and "re-educated". After four years he cracked, pledging loyalty. Reunited with Choi at the first party he attends, it is announced that the couple will remarry and act as the Dear Leader's film advisors. Together they made seven films, in the process gaining Kim Jong-Il's trust. While pretending to research a film in Vienna, they flee to the U.S. embassy and are swept to safety.

A nonfiction thriller packed with tension, passion, and politics, A Kim Jong-Il Production offers a rare glimpse into a secretive world, illuminating a fascinating chapter of North Korea's history that helps explain how it became the hermetically sealed, intensely stage-managed country it remains today.

What listeners say about A Kim Jong-Il Production

The book is fascinating and well narrated, but I am shell-shocked. It's not just the heartbreaking story of Madame Choi and Shin Sang-Ok. Though I am appalled by the way their lives and those of so many others were so tidily snatched away by that despicable despot. My heart really goes out to the ordinary citizens who are held captive and controlled every day of their lives in that backward country. How can this stuff go on? Because you know it does. Excuse me while I go kiss the ground again.

Just an amazing book! For those (like me) who have a narrow understanding of Korea, this book is a great introduction to the lives of Choi Eun-Hee and Shin Sang-Ok. But interwoven into the story of "Madam Choi" and her husband are revealing peeks into the DPRK.

An eye-opening look at North Korea.

What made the experience of listening to A Kim Jong-Il Production the most enjoyable?

Learning information on North Korea I didn't know before.

What does Stephen Park bring to the story that you wouldn’t experience if you just read the book?

Excellent narration, even with no luck with different accents

Many parts made me cry some, like Shin's wife's story.

Other than some Korean pronunciation errors, I thought the narrator did a great job throughout the book. The non fiction story of the abduction of 60s 70s era famous Korean director and movie star, Shin Sang Ok and Choi Eun Hee, was engrossing with interesting background information regarding the North Korean Leader society and it's political/social tactics. I couldn't put the book down. I've read the book alongside listening to audiobook, and found both very enjoyable. The pictures in book are great, but wished it had more of the two abductees or the "other women" of Kim Jong-il, the dictator son of North Korea's patriarch, Kim Il-Sung. Highly recommend, if interested in hermit kingdom.

Moved along pretty well, and kept me interested. I will probably look for more books about North Korea now.

This incredible work of creative nonfiction will undoubtedly catch many Asia-watchers with surprise. Facts about North Korea are thin on the ground here in America, but this book blasts open a personal history of Kim Jong-Il with a canny, fluent, and wise commentary that seems far beyond what anyone else has been able to manage. It is an enormous feat of research, but more than that, it is so completely and compulsively readable that we are held captive.

It begins detailing the history of two individuals who were instrumental in the South Korean film industry in the 1940s and 50s. Before you ask how relevant that information is to us today, just remember that the author is a film producer who claims these early films have a cult following now, perhaps because of the Gangnam rage that has spread worldwide, and has opened a glimpse into a world never before considered worthy of serious study. We couldn’t have a better introduction to film in South Korea nor have we ever had a more detailed look at the North Korean film fanatic Kim Jong-Il, who kidnapped the two leading lights in the South Korean film industry to bolster his own propaganda machine.

The beautiful and talented South Korean film star Choi Eun-Hee was kidnapped first. Fischer compares her favorably to Marilyn Monroe in terms of star quality and stage presence. Her former husband, the film director and producer Shin Sang-Ok, was taken later, though because he’d tried to escape he was imprisoned for a number of years. Eventually they were reunited in Pyongyang and began producing films for Kim Jong-Il’s ailing film industry. This book is partially based on their memoir of their time in captivity and their successful escape to the West.

Perhaps more importantly, we learn a huge amount about the Kim regimes. This material may be out there somewhere, in a hundred escape memoirs, spy reports, or academic papers but I have never seen so much information about Kim Jong-Il and North Korea in one place before. Besides all this great new information, the writing is absolutely first-rate, the story completely stupefying, and the immersion into film so well-informed that it seems like a trick.

Who is Paul Fischer and how does he know so much about North Korea? The Introduction and Afterward discuss sources, and mostly my concerns about veracity of content were allayed. It may just be possible that no one ever bothered before to gather together the dispersed information in just this way before. I just don’t know. Frankly, it is Fischer’s skill that is simply stunning, besides the vast trove of collected information about the Kim regime and North Korea. The writing is rich and fluent in a way writers only dream of, and the sections pass easily into one another while we readers are led deeper into the intricacies of film lore and the strange and frightening propaganda machine of Kim Jong-Il.

I have no idea whether or not Shin Sang-Ok and his wife Choi Eun-Hee were abducted or if they defected to North Korea. In my mind it is regrettable either way but not particularly relevant now. It is not what I focused on. I have heard some of the details of kidnapping, of prisons, of life in North Korea, but nothing like this detailed look north of the 38th parallel. This book has everything: grandeur, mystery, terror, and a fluency that makes this tremendous storytelling no matter what side of the political spectrum you fall on.

This book absolutely has to be labelled creative nonfiction because of the conversations recounted verbatim and the reconstructions of scenes so completely you would think Fischer created them. I don’t care. If one-fourth of the information in this is book is true we have made great headway in understanding and demystifying a completely obscure regime. You will recall the splash Truman Capote made with his fictional recreation of the nonfiction event he wrote about in In Cold Blood. Let’s call this in the same vein until we can verify, but remember this man Paul Fischer. He has burst on the literary scene with a truly fantastic and important offering. If he can make films the way he can write we are in for a real treat.

I listened to the Random House Audio production of this book, read beautifully by Stephen Park. I have ordered the print edition to look it over more carefully. As I say, books like this don’t come along very often. To think this was a debut is completely unbelievable.

This book is the well-researched true account of the abduction of Madam Choi and her ex-husband Shin Sang-Ok, South Korea's most famous actress and film director. Through the story of their abduction, imprisonment, and coerced work making films for North Korea, the author also paints a mesmerizing, fascinating, and horrifying picture of life in North Korea under the dictator Kim Il-Sung and his son, Kim Jong-Il. Kim Jong-Il turns his fascination with cinema into an iron hold over the state's propoganda machine and spends decades essentially brainwashing the population of North Korea into believing they live in a worker's paradise and that their leaders are essentially gods.

If you aren't particularly aware of any of the history of North Korea it's a very approachable and eye-opening book that will shed light into how a government can indoctrinate an entire country to an incredible extent even in modern times. Even if you are somewhat familiar with North Korea history, it's still a gripping kidnapping story as Shin Sang-Ok makes multiple failed escape attempts, and how he and Madam Choi plan a final deception and desperate last attempt. On a broader level I think there are also some very strong lessons about how much we are all influenced by the media we are surrounded with, even as we like to think we are not.

You'll read or listen to this book shaking your head the entire time that such crazy things can actually happen, but they did, and do, and likely will again.

I had no idea

Kim Jong-Il. Wow, he is such an odd mixture of self deluded, ridiculous, and malevolent. It is hard to believe he was a real person.

Yes, I couldn't put it down. The story is bizarre and interesting, the author conveys a lot of background historical information in an engaging way. It is a fantastic read!

I love this book and recommend it to everyone. I learned so much about North Korea, the history of the Korean war, the history of cinema. And it was told in an absolutely engaging and interesting way.

the story was exciting and insightful. I've been looking forward to reading it and I'm glad I did.

Where does A Kim Jong-Il Production rank among all the audiobooks you’ve listened to so far?

It was my first audiobook!

What does Stephen Park bring to the story that you wouldn’t experience if you just read the book?

He did a wonderful job. I guess one thing would be I wouldn't have known how to pronounce the Korean names and places.

No it didn't make me laugh or cry, however, it did make me want to learn more and read more books about North Korea.