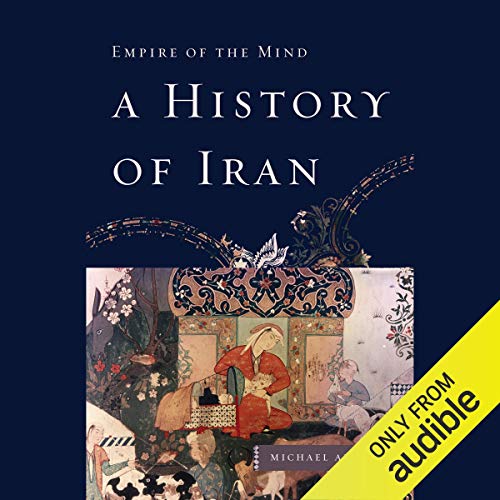 A History of Iran

By: Michael Axworthy
Narrated by: Peter Ganim
Try for $0.00

Although frequently vilified, Iran is a nation of great intellectual variety and depth, and one of the oldest continuing civilizations in the world. Its political impact has been tremendous, not only on its neighbors in the Middle East but also throughout the world. From the time of the prophet Zoroaster, to the powerful ancient Persian Empires, to the revolution of 1979, the hostage crisis, and the current standoff over Iran’s nuclear ambitions, Michael Axworthy vividly depicts the nation’s rich history. He explains clearly and carefully both the complex succession of dynasties that ruled ancient Iran and the surprising ethnic diversity of the modern country, held together by a common culture. With Iran again the focus of the world’s attention, A History of Iran is an essential guide to understanding this volatile nation.

What listeners say about A History of Iran

It's a 4 star book. Narration was great as far as voice acting is concerned, but the narrator kept on unnecessarily and even pretentiously trying to pull off an "authentic" pronunciation when uttering an Iranian word or name, while having no idea what the Persian language sounds like. I'll go over a few of the many:

1) He insistently over-pronounced every 'h' consonant as in an Arabic 'hard h', while anyone having picked up a rudimentary sense of Persian phonetics from having heard a conversation or two would know that it doesn't have a hard h.

3) Even recently prominent proper names (like "Ahmadinejad") regularly featured in the news were mispronounced.

This is not a librivox recording that you'd do for free as a hobby. You are paid for this and should act professionally and responsibly. Put in some effort, do your homework.

The story and history is really interesting. Unfortunately, the narrator doesn't speak the language, so the accent and pronunciation were hard to bear.

Very insightful great historical record from start to present. No disappointments here. Especially enjoyed the account of transition from Zoroastrianism to Islam

Good overview of Iran from its ancient history to the Green Revolution. The author goes beyond discussing historical events and gives particular interest to Iranian poetry, minorities in Iran, and the history of US involvement in Iran.

One of the best book in covering Iran histoy

Not only it covet the history, it also provide I formation on the intellectual tradition, the Shia Islam and the impact of farsi as a language of literature.

Biased toward the theocracy at the end. A grater focus on pre-twentieth century history wouls have been uaeful.

This book provides a lot of history on Iran. Great overview and recommend if you want some background on this country.

If you can follow history from a very dry perspective, you might do OK with this book. For those who just want to know why they hate Westerners? And not all in Iran do. Skip everything and start with chapter 7.

a complete and detailed history of Iran

a complete and detailed history of Iran. ... well explained and analyzed, and well narrated

At first, I thought this was a pretty good book. It started out and spent a decent amount of time going into detail about the Achaemenid empire. Oddly enough, the author even covers the Qajar dynasty, which many books skim over. Unfortunately, it became extremely obvious the author was biased once the 1900s arrived. As soon as the author began to describe the Pahlavi dynasty, the blame game began. Everything is the fault of the British, US, and the evil capitalists.

For a book about Iranian history, it's incredible that the author spends about 10 minutes talking about H.I.M. Muhammad Reza Shah. Even if someone hates what the Shah did or stood for, no historical record of Iran could be complete without spending at least an entire chapter on the time period between 1900 and 1979.

To make matters worse, the author actually appears to be a supporter of the post-79 regime that has murdered so many, and destroyed the nation.

The author mistakingly states that before Obama, no one had tried to talk or negotiate with Iran. This is absolutely false, as every single US President has made many attempts to communicate and in fact, negotiate with the monsters.

The only way that this book makes sense is if the author is an IRGC employee. The nonsense at the end about the nuclear investigations makes it very clear that he is biased or simply on the regime's payroll.

If you want to read a good, historical record about Iran, pick up a copy of Amir Taheri's The Persian Night.