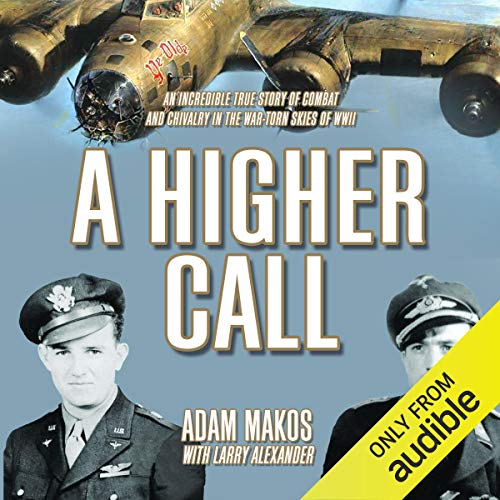 By: Adam Makos,Larry Alexander
Narrated by: Robertson Dean
Try for $0.00

Four days before Christmas 1943, a badly damaged American bomber struggled to fly over wartime Germany. At its controls was a 21-year-old pilot. Suddenly, a German Messerschmitt fighter pulled up on his tail. Worse, the German pilot was an ace, a man able to destroy the American bomber in the squeeze of a trigger. What happened next would later be called 'the most incredible encounter between enemies in World War II.'

This is the true story of the two pilots whose lives collided in the skies that day: 2nd Lieutenant Charlie Brown, a farm boy from West Virginia, and 2nd Lieutenant Franz Stigler, a former airline pilot from Bavaria who sought to avoid fighting in World War II.

What happened between them was later classified 'top secret.' It was an act that Franz could never mention or else face a firing squad. It was an encounter that would haunt both Charlie and Franz for forty years...

What listeners say about A Higher Call

Undoubtedly based on the true story

Fascinating story. The bombing of his Airfield and a situation when Franc was under the water are described as most realistic..

Portrays a side of the war rarely visited, focusing on the humanity beneath all the chaos. Congratulations to the authors and narrator for this great work.

This book holds the power to change any prejudice one might have on the Luftwaffe and the German people during WWII.
I am defendant of a Holocaust survivor, and I know I will never feel the same way again.

What a beautiful book and such a simple yet profound conclusion “Enemy’s are better as friends”
A must listen/read!

Probably one of the best books out there!!!

What made the experience of listening to A Higher Call the most enjoyable?

The book is good, probably one of the best books in the history of the World. The story is remarkable and in todays' times a pleasure to see once upon a time, even in hardship, men were humble and humane...today's people should learn about what it was to me a human...

I loved when he was in Sicily and they were looking down at Trapanni,,,I have been there and seen the field

Absolutely yes...and am listening to it again

Would you consider the audio edition of A Higher Call to be better than the print version?

What was one of the most memorable moments of A Higher Call?

there are many, but the highlight of Stigler escorting the B17 is unbelievable

meeting between the pilots in 1992

It was the most emotional story I ever read. The climax, I believe every reader has ideally imagined, never ever reached the real moment they finally met. I have to control my tears from flooding the ambience.

A Tale So Wonderful - Because It Is Real

This audiobook is a must for anyone addicted to military aviation history. Well researched, written and rendered, it's author, publishers and reader delivered a masterpiece. Thank you very much for this outstanding experience.

what a book,very powerful i was elated tearfull and exhausted at the end. I could not put it down, true men of honour in a time of hell. brilliant

Gritty war story and interesting reading Of the war in air, as seen from both sides. As an aircraft fanatic this is a terrific book. Also very heart warming and humbling. Fully recommended.
Keith Traylor

Yes I would! A compelling story, well written and well read. Really draws you into the lives, fears, and hopes of the principal protagonists. It also gives a good overview of the politics and military situation that shaped the lives of those we read about.

Without a doubt, the Luftwaffe fighter ace Franz Stigler. The book really pivots around him.

It has to be the moment where Stigler holds off shooting down the crippled B17 flown by Lt. Charlie Brown. In doing so, he has a personal shift in conscience: sacrificing his hitherto coveted Iron Cross but, by his own later admission, gaining something much more valuable...

Yes. Many. Many. But particularly the one described above.

My only concern is just how much of the book is actually true. Such is the immediacy of the writing, it reads like a novel. The authors state that the text is based on more than eight years of interviews with the principal participants, but I wonder how much detail can be recalled so many decades after the events. So many WW2 books have come under suspicion recently, particularly those that, like "A Higher Call", have been published after the deaths of those involved, meaning that there's nobody around to either corroborate or refute the facts. There's no denying it's a fantastic read, but if were an author trying to make lots of money - and I understand the film rights have already been sold - I'd try to make it as entertaining as possible, too.

Still, I loved this book, and I hope my doubts are unfounded. Go read it!

holding back tears of joy, sadness, laughter and

heart warming, packed with historical facts, a testament to a generation of amazing courageous people

I have read quite a number of books recently on these fly boys of the war and this is an outstanding account of an incredible story. The german pilots had it hard theres no doubt anout it, this covers the experience of Franz and his commrades vividly.

The best audiobook I have listened to!

From start to end I was gripped! This is a unique story and I am thankful it was told.

A Great War story. One that I’d never heard of. The narration by Robertson Dean was excellent. If you enjoy war books than this is well worth a listen.

Fascinating true story and it is nice that these two brave pilots finally met, so many years after the Second World War.
Well narrated and held my attention throughout quite a lengthy detailed account.

A beautiful lesson in humanity , we can all learn from . a book for every one

Absolutely great, I would reccomend this book to a

Absolutely great, I would recommend this book to anyone, even if they are not intrested in the second world war.
The life for both Franz Stegler and Charlie Brown, are both tremendously interesting.

An interesting perspective story of a german ace fighter pilot ( franz stigler) and his perspective of the war from its beginning to the end. Recounting the interesting life he lived of how he climbed the ranks of the german airforce. This audiobook shows the interesting perspective and honor it was to be a german fighter pilot. It also reveals the unsaid honor code between fighter pliots on both sides during this time. This book also covers a brief perspective of (Charlie Brown) an American bomber pilot for the B-17 Flying Fortress(named "Ye Olde Pub") plane was severely damaged by German fighters. Luftwaffe pilot Franz Stigler had the opportunity to shoot down the crippled bomber, but did not. This is his story told within franz stiglers timelines.

A story more about German fighter pilots of WWII than the episode headlined. Terrific background well told. More books on the losers are required.

What appeared to be a very slow start turned into an amazingly great book. Wonderful background information and detail that was from the mouths of the pilots. Wow.

What a brilliant insight into the non nazi German life of a soldier.
Such a warm and wonderful finish.
A story needed to be heard.

Probably one of the most important and outstanding stories of the war. Beautifully written and read. RIP Charlie and Franz

The reader did a fantastic job. His normal speaking voice was relaxing to listen to (reminded me of someone reading a book by a fireplace). He put on voices to match the different characters that were perfect.

The author did a good job of researching the facts and putting together a narrative that was a ripping story! Best audiobook I’ve listened to in years!

Well researched, documented and delivered story. Best of all is that it was true.
Enjoy the read.