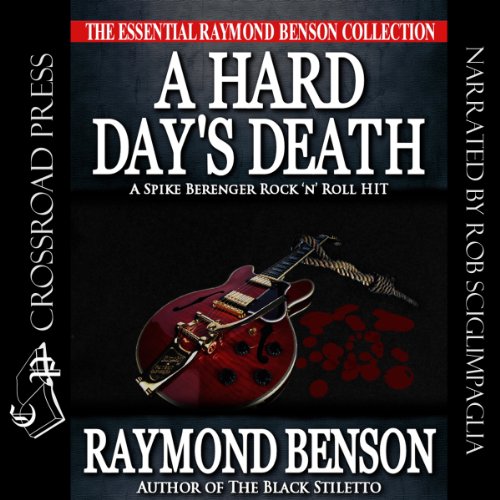 “A frantic dash through the world of rock and roll. Thrillsa-plenty and backstage passes to the magical mystery musical twilight zone.” (Ian Anderson of Jethro Tull).

From Raymond Benson, author of 16 novels, including six James Bond 007 novels, comes this original mystery/thriller set in the world of rock ‘n’ roll.

Rock star Peter Flame is found dead. It looked like he hanged himself, but the coroner ruled it a homicide. Now it’s up to Spike Berenger and Rockin’ Security to find out who killed Flame… and why. Was it his ex-wife? A former bandmate? A religious cult that had become Flame’s groupies? A member of one of the mysterious rock ‘n’ roll gangs terrorizing New York? Only a music insider like Spike can hope to wade through the rumors and the legends and find the cold hard fact...and a cold-blooded killer.

What listeners say about A Hard Day's Death

Interesting story of a coroner who says the rock star was not a suicide. Good story that keep you to the end, with good narration. Given audio for my voluntary review

It was a great story but since I am not a music lover it is something that half of the story I did not understand it and most of the characters I did not know who they are.
For a murder mystery I had to give it 5 stars it was written and narrator did an awesome job telling thecstory.