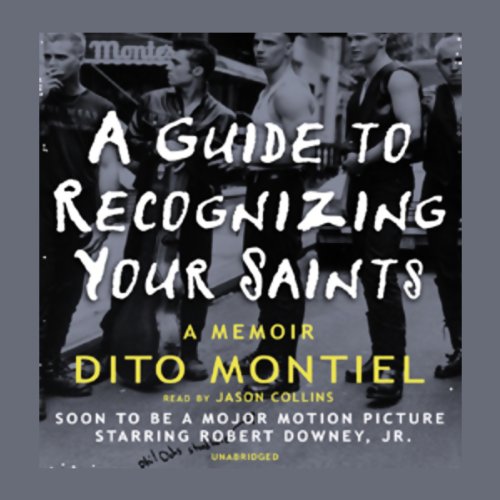 A Guide to Recognizing Your Saints

A Guide to Recognizing Your Saints

Orlandito "Dito" Montiel grew up wild in the streets of Astoria, Queens, pulling pranks for Greek and Italian gangsters and confessing at the church of the Immaculate Conception, gobbling hits of purple mescaline and Old English, sneaking into Times Square whore houses, and at times getting near much graver trouble. Entering adulthood in the 80s, he escapes into the underground and punk cultures of Manhattan.

This is the story of a young man's hunger for experience, his dawning awareness of the bigger world across the bridge, and the loyalties that bind him to the flawed and desperate Saints that have guided his life: Bob Semen; Frank the dog walker; Jimmy Mullen; Cherry Vanilla; Allen Ginsberg; and all the junkies and insaniacs like Santos Antonios who said, "Now Dito remember, in life you gotta be crazy."

"Montiel tells his entertaining, sad tales with a combination of affection, glee, and nostalgia. He's managed to escape the dismal fate of many of his childhood cohorts, while still cherishing and embracing their humanity." (Publishers Weekly)

I should have done this after the first time I absorbed this story.

Now, in the midst of my 4th listen, I have noticed no one has reviewed this great memoir yet has thrown me off.

Why?
For years I have wanted to write my own story, but I did not have my 15 minutes, I did not search for Bitter Mellon with a beloved and brilliant mind, a talented and brilliant writer and BEING in general....although, I do have jars of it in the cupboard- it does exist. I did not spend time with Cherry Vanilla, but I too recognize that voice, and always will.
My trips to “The City “were playing “homeless traveler”, far from owning it, crossing the concrete Desert....O’Shea’s.

However,
I am drawn to your book in other ways- outside of Allen, Cherry, Lou, Leonard and Woody.

Starting the story is always the toughest part.

The past few years I have been filling a notebook with my own adventures..

I think your book is what will let me write mine.

I walked and hitched 1,000’s of miles across the desert, mostly going to Grateful Dead Shows, or pitching a tent for a season, rainbow gatherings, spending time in sweat lodges, vision quests, El Caminos with carnies, school buses with Road Warrior Hippies in lock up, living life to the fullest, loosing all of that, and pulling myself back out of the gutters. Again and again.
My first draft was named “Bootstraps”

Each day offered a different experience for me. I’ve always wanted to get it on paper, I even bought a tapers recording system so I don’t stray tooooo far of target.

I never had my fame, but between being “the Guy”, at a music venue who ran the errands for the bands, touring with the Dead, most likely passing you at The Laughing Horse, barely escaping an international incident on a German Tanker parked in the Harbor at Mardi Gras, eating dinner at Federali gun point in my van in Mexico, wrecking the same van at less than five miles an hour- twice...knowing that 16 khrishnas can fit comfortably in my van and I also have many other years to write about beyond that one summer.

I’ve always “self edited “ to protect myself, my kids and my parents.

But Ditto,
They know. You did a lot of us favors.

People, read this, listen to it. It’s great, and will let yo get your writing out there.