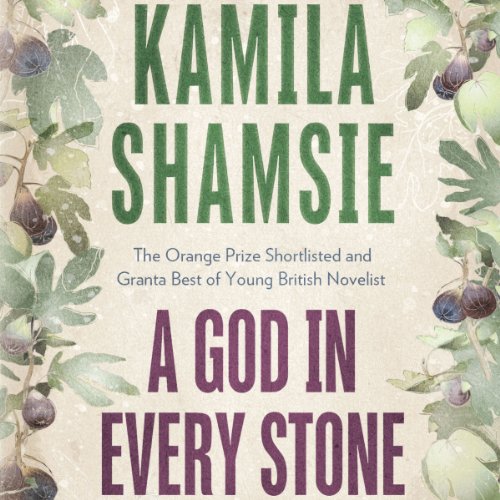 A God in Every Stone

By: Kamila Shamsie
Narrated by: Joan Walker
Try for $0.00

A kaleidoscopic masterpiece of empire and rebellion by Kamila Shamsie, the Orange Prize shortlisted and Granta Best of Young British Novelist

In the summer of 1914 a young Englishwoman, Vivian Rose Spencer, finds herself fulfilling a dream by joining an archeological dig in Turkey. Working alongside Germans and Turks, she falls in love with archaeologist, Tahsin Bey, and joins him in his quest to find an ancient silver circlet. The outbreak of war in Europe brings her idyllic summer to a sudden end, and her friends become her nation’s enemies.

The following spring, in the battlefields of Europe, Qayyum Gul, a Lance Corporal from Peshawar fighting for the British, loses an eye, and is sent to recover in a Royal Pavilion in England, where he slowly begins to doubt his loyalties to the King. Returning home, Qayyum shares a train carriage with Vivian Rose whose search for the circlet has led her to Peshawar in the heart of the British Raj. Fifteen years later, they will meet again, and their loyalties will be tested once more amidst massacres, cover-ups, and the disappearance of a young man they both love.

What listeners say about A God in Every Stone

This is the sort of book you can become completely absorbed in. It is a story full of rich imagery, history, well-drawn characters and exploration of what it is to be human. Plot lines were teased out over a lengthy time period and I grew to love the main players and how lives are altered by such small, seemingly innocent actions/events. Didn't want the story to end.
If you like literary fiction with a historical influence, give this a go. I loved it.

Would you consider the audio edition of A God in Every Stone to be better than the print version?

The scope of this novel is immense , sweeping from the 5th century BCE explorer Scylax, to the efforts of 20th century archaeologists to find the circlet of Scylax; to the experiences of Indian troops in World War 1 and finally to the killing by the British Army of peaceful protesters in the independence movement in Peshawar - in what is now Pakistan - in 1930. It's a gigantic canvas. Kamila Shamsie was born in Karachi and now has dual Pakistani and British citizenship, and an extract of this book was in Granta's '20 best British Writers' in 2013. That extract dealt with the shattering experiences of young Peshawar soldiers far from their families' blossoming orchards during and after WW1. It was stunning in its empathy, clearly driven by the writer's own passions. This is relevant to listening to the whole 9 hours of this the complete novel which seems a sum of some brilliant parts, the most indelible and moving being the lives of those Peshawar brothers during and long after WW1. The experiences of Vivian Rose, the young Londoner on an archaeological dig just before war breaks out and as a VAD during the war are not as convincing or moving. Shamsie is at her best in the political parts set in Peshawar where Vivian Rose eventually fetches up. It's almost as if she is writing two novels which don't quite meld together.But don't let this put you off - this is a challenging, highly intelligent and ambitious listening experience, even if it's filled with the writer's passions rather than the characters'. It's well worth the effort of keeping with it. The account of the bloody end to the peaceful protest in 1930 and the bewilderment and sufferings of the Pathan soldiers in WW1 are as unforgettable as any war writing, and much less known about probably by most British listeners. It's all helped by Joan Walker's narration which creates the authentic scenarios for listeners with her range of accents - which unless they are familiar with this full range of voices, rhythms and accents could not be created in readers' heads.

I loved it. What a writer!

This is an excellent story, beautifully told. All the characters are fully developed and most of all So eloquently read by Joan Palmer. I loved it.

I found the setting and history of Peshawar fascinating as well as the opportunity to learn about the culture. I found the thread of this narrative somewhat elusive and the plummy tone of the narrator grated on me.

Would you listen to another book narrated by Joan Walker?