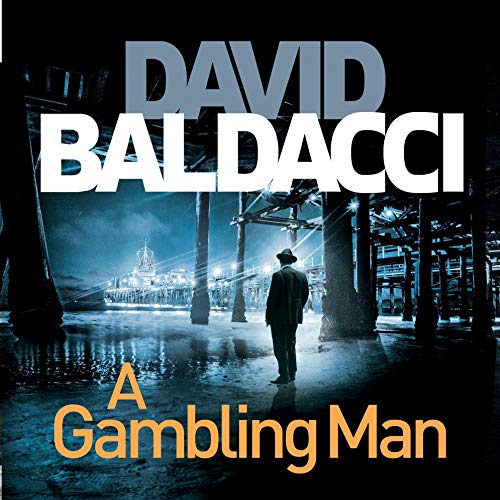 By: David Baldacci
Narrated by: Brittany Pressley,Edoardo Ballerini
Try for $0.00

Evoking the golden age of crime, and for fans of Raymond Chandler and Agatha Christie, comes A Gambling Man, from one of the world’s best-selling thriller writers, David Baldacci.

A lucky roll of the dice.

California, 1949. Aloysius Archer is on his way to start a new job with a renowned private investigator in Bay Town. Feeling lucky, he stops off at a casino in Reno, where he meets an aspiring actress, Liberty Callahan. Together, they head west on a journey filled with danger and surprises—because Archer isn’t the only one with a secretive past.

A risk worth taking.

Arriving in a town rife with corruption, Archer is tasked with finding out who is doing everything they can to disrupt the appointment of a top official. Then two seemingly unconnected people are murdered at a burlesque club. In a tight-lipped community, Archer must dig deep to reveal the connection between the victims.

All bets are off.

As the final perilous showdown unfurls, Archer will need all of his skills to decipher the truth from the lies and finally, to prove she’s a star in the making, will Liberty have her moment in the spotlight?

What listeners say about A Gambling Man

one little think - there is no need for the "he said"/"she said" in an audio book :)

I’m sad that this book is at an end. Such wonderful, lucid writing that brings not only people but also inanimate objects to life. Rich and sumptuous to the very last. A true trip back in time that I thoroughly recommend any potential reader! Can’t wait for the next instalment.

Better than the first one even

I found the first one really fascinating but with this one I would have loved to be able to give a 5+. Hoping for a third book sonner rather than later. Love the characters and the "scenery"

A special word for Edoardo Ballerini who is one of the best narrators I've heard.

This had that sloppy formulaic ghost written feel - macho man beats up thugs (who aren’t in it long enough for it to be satisfying pay back). Two dimensional women are impressed by him for nothing much. Kind of like very boring bad Jack Reacher.

not as good the first

nowhere near as good as the first . good concept but not really a new idea .

a great story. Ms presley needs more variation in her repertoire of voices, but it didn't detract from the overall listening experience.

Archer is a lot like Reacher. enjoyed the plot
the reader kept the pace goi g

I found this book a very good follow on from the first. The main character “Archer” stayed true to his personality portrayed in the first of (hopefully) the series. Edoardo Ballerini reads beautifully, he did the female roles in the first book but in this book Brittany Presley did the female lead. She did this very well but I am used to just one reader and found this a distraction.

It took quite a bit to get into the story and then suddenly I just didn’t want to stop listening. Excellent book

Brilliant storytelling from the talented Badicci .Set in roughly 1950s era , it is , atmospheric , entertaining. and thoroughly enjoyable Would definitely recommend this book and love his character Archer in this new series .Superb

Very entertaining story. Loved to listen rather than read. Look forward to hearing more about Archer and liberty.

somewhat predictable with only a few twists

Perhaps I'm getting used to Baldacci and how he sets up his plots and storyline but I found it all a bit predictable.

The story wasn't as compelling as others but it was still a nice listen.

We have a new hero in Archer

Archer is my new hero. It’s nice to know there were such bad guys back in the 50’s. I can’t wait until we have Archer’s next case.

Love Eduardo’s voice, but not when he goes yankie

Love all of Baldacci and have read them all! Am enjoying Archer, especially as I grew up during WW2, but in Australia.
Hope you write a third Aloysius