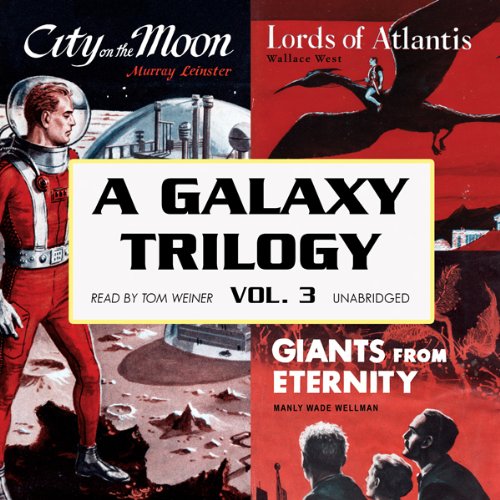 Here are three more stories from the pioneers of the early days of pulp science fiction.

In "Giants from Eternity", scientist Oliver Norfleet and his buddy Spencer DuPogue turn to history's greatest scientific minds to stop a mysterious red blight that is growing around the site of a meteor crash and consuming everything in its path.

In "Lords of Atlantis", Atlantis had once been ruled by the Titans, who were replaced by the red-skinned, red-haired Martians Zeus, Hera, Athena, and others. Now the Titans, chafing under the so-called benevolent progress of their rulers, plot rebellion.

In "City on the Moon", the Earth shuttle's moon-based landing mechanism is destroyed by an avalanche. Joe Kenmore determines that explosives were the cause and must rush to restore the landing beam before the shuttle reaches its "point of no return".

What listeners say about A Galaxy Trilogy, Volume 3

Very good and very original stories. They are what is called soft science fiction, without very technical details. And strikingly original if you consider when they were written. Expertly read with Many voice changes and subtleties. I particularly like the story about Atlantis.