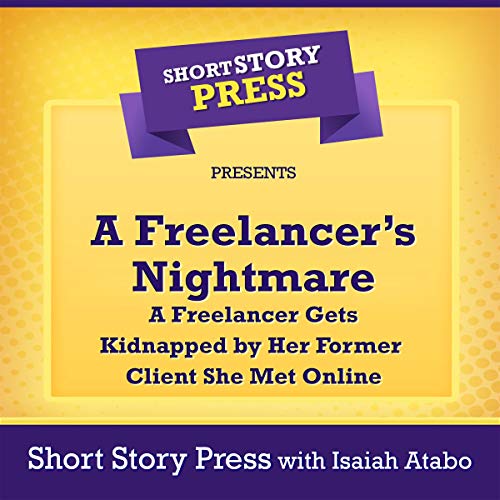 A Freelancer's Nightmare: A Freelancer Gets Kidnapped by Her Former Client She Met Online

Her father left them when she was just five. Now in her early 20's Lucy knew better than to concentrate on her academics alone. She did every menial job she could lay her hands upon so as to support herself and (hopefully) relieve the burden on her mother...she did this despite the fact that her mum was against her being a student-worker.

The problem, however, was not her mum, rather, the jobs were taking much of her time and weren't bringing much to the table, so she switched from job to job. She was glad when her friend, Julia, introduced her to freelancing on Upwork.

Julia helped got her account approved and taught her how to send winning proposals. It wasn't long before Lucy started landing jobs, but if only she knew the fate that awaited her.

She gets hooked up again with a client for whom she previously wrote a romance novel. Apparently, the client wanted her to help turn the novel into a movie, which was good news because it meant more money and popularity.

But unfortunately, the client wasn't whom she thought he was. He had ulterior motives, the job was only a lure. It wasn't long before Lucy discovered she had fallen into the hands of an organized network of human traffickers.

Isaiah is an undergraduate student at the University of Jos. His passion for reading and writing novels was something he had since childhood. This passion for writing found an outlet when, in 2015, he discovered an online community for writers and readers. It wasn't long before he began writing and posting stories on that website, and since then, he has had his short stories published on several online forums. At first, writing was just a hobby, but in 2018, he decided to take it a little deeper and build a writing career. He is currently a freelancer on Upwork and an aspiring blogger.

What listeners say about A Freelancer's Nightmare: A Freelancer Gets Kidnapped by Her Former Client She Met Online