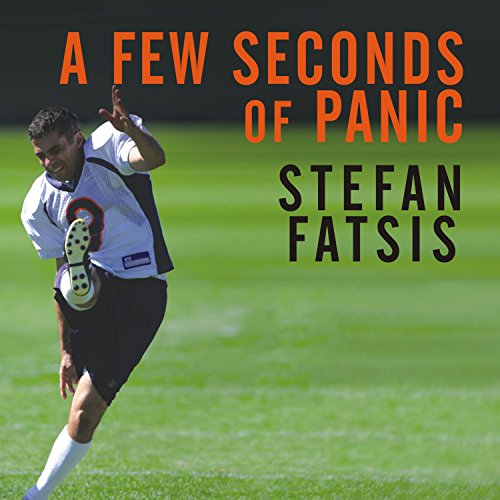 A Few Seconds of Panic

A Few Seconds of Panic

In Word Freak, Stefan Fatsis infiltrated the insular world of competitive Scrabble players, ultimately achieving expert status (comparable to a grandmaster ranking in chess). Now he infiltrates a strikingly different subculture: pro football. After more than a year spent working out with a strength coach and polishing his craft with a gurulike kicking coach, Fatsis molded his 40ish body into one that could stand up - barely - to the rigors of NFL training.

Over three months in 2006, he became a Denver Bronco. He trained with the team and lived with the players. He was given a locker and uniforms emblazoned with the number 9. He was expected to perform all the drills and regimens required of other kickers. He was unlike his teammates in some ways -most notably, his livelihood was not on the line as was theirs. But he became remarkably like them in many ways: he risked crippling injury just as they did, endured the hazing that befalls all rookies, daily gorged on 4,000 calories, and slogged through two-a-day practices in blistering heat.

Not since George Plimpton's stint as a Detroit Lion more than 40 years ago has a writer tunneled so deeply into the NFL.

At first, the players tolerated Fatsis or treated him like a mascot, but over time, they began to think of him as one of them. And he began to think like one of them. Like the other Broncos - like all elite athletes - he learned to perfect a motion through thousands of repetitions, to play through pain, to silence the crowd's roar, and to banish self-doubt.

Stefan Fatsis provides a look into every football fans fantasy, life in the NFL. Life in an NFL training camp as a kicker Stefan Fatsis gives us an insight not as an NFL player, but that of a fan living a dream. The book evolves around the pressures of kicking, but does an excellent job of how fragile NFL careers are and the ups and downs of players living on the edge. I enjoyed this book very much.

A Few Hours of Pleasure

Fatsis is one of my favorite sports journalists. His writing for the WSJ and his commentaries for NPR about the industry of sports are always smart and informative. I loved his last book, Word Freak, which even got me to play scrabble again. In his latest book Fatsis tells the story of joining the Denver Broncos as "rookie" field goal kicker during training camp. We get an insider account of the often brutal business of the NFL, a sub-culture largely closed to outsiders despite the fact that teams play in front of millions each Sunday.

An Everyman's Dream Into Action

I'd had this in my wish list for a while, and honestly dove into it only because it seemed to be of modest length, and it's currently football season. I remember hearing the book review on NPR a long time ago when the book was released and thinking, "Oh, he's just cribbing from Plimpton!" I was pleasantly surprised and engaged at Fatsis' narrative of his quixotic attempt to mold himself into something approaching an NFL kicker. Fatsis sucks you in with his candid, eye-opening picture of an NFL locker room and its players. After a short time, by suffering alongside the players with two-a-days, rigid dawn to dusk schedules, and the constant physical demands, Fatsis managed to blend in with all the other eager rookies and hired hands trying to win a spot on the roster in camp. Moreover, he earned the respect of many veterans on the team. As he says in an epiphinous moment, he became a Bronco - not just some journalist hanging out in the locker room. Through his own determination (and the cooperation of the Broncos coaching staff), Fatsis not only gives you a terrific look at the inner workings of a modern NFL franchise, but what it is like to be (or aspire to be) a real NFL player. Plenty of books can detail the lives of NFL superstars, but I found it far more fascinating to see how life played out for the largely anonymous rookies and journeymen who found their way into Broncos training camp. All those who are prone to over-glamorizing the sport would do well to read this book and find out just how the vast majority of NFL players are treated - like disposable, de-humanized cogs to be plugged in and out (and in and out and in and out again) as the situation dictates. At times it seemed like I was peering at the inner workings of management in a Chinese garment factory instead of a modern American multi-million dollar entertainment business.

But not all the book is swept up such documentation and analysis - quite a lot of it (and some of the most engaging bits) deal with Fatsis' personal struggle to train, to learn his small bit of the offense, to force his middle-aged body to put up with the rigors of an NFL training camp. He successfully draws you in so well that you cheer at his few triumphs and wince at the all too often failings as camp wears on into the pre-season. The mental toughness that he develops is interesting. His quest reveals well how many players are physically gifted enough to play in the NFL, but few have the smarts and mental toughness to really make it long-term. And, as a player informs him after he spectacularly fails a kick under pressure with the whole team watching, "Now you really know what it is like to play in the NFL." We're all too often judged or remembered more for our failures instead of our successes. Or, as Jason Elam puts it, "you're only as good as your last kick." Fatsis' sometimes funny, sometimes ironic, but always honest exploration of his own desires to play, alongside that of his teammates are some of the best parts of the book. I had expected to be a little jaded with the sports psychology bits, but they were quite thought provoking.

All in all, this is a great book. Recommended for sports fans and non sports fans alike. The author reads his own book and clearly and vividly recalls a number of the episodes while reading.

As a Broncos fan, this is a must-read.

It was frustrating in a good way, successfully depicting the Fatsis' follies. I'm a Denver Broncos fan and this is essential reading, the kind of behind-the-scenes look at one of my favorite Broncos years I'd always wanted but would never expect to get. He covers all the right details, from getting fitted for equipment to the human stories - he got it all.

Which character – as performed by Stefan Fatsis – was your favorite?

Really any sports fan could enjoy this, a crazy journey of a laymen entering the complicated sports world we love.

A great book for any NFL fanatic

This book is a great listen for anyone who is a huge fan of the NFL. It's like the show Hard Knocks, but even more in depth.

The author takes you inside the NFL unlike anyone I've ever seen. You'll be surprised to hear just what most of the players think of playing in the NFL.

For true fans of the sport, Fatsis got to live a dream that many of us would love to live.

I hate this guy.

Would you ever listen to anything by Stefan Fatsis again?

Get a professional narrator.

What character would you cut from A Few Seconds of Panic?

I thought about asking for a refund about 6 times during this book only to continue on and give it just a little longer to see if it would get better. It didn't. It should have been named: "A few hours of bragging: A 43 year old guy gets a book deal by fooling the book company into thinking he was going to write about the REAL players only to use the experience to make himself feel like he could have been an NFL great if only he didn't wait until he was 43 years old to try."

At one point, after receiving tons of special treatment & assistance, he made a few field goals from the 35 yard line (without anyone trying to block him) and then went on to say how the rest of the team didn't do as well as he did that day! I couldn't believe my ears. What an arrogant (for no reason) little-man-syndrome-having jerk-off. Whenever something went his way he would brag about his innate athletic ability and whenever he'd be faced with reality (ie. not being able to perform as well as the others, being injured or sore) he would chalk it up to his age, his height, his weight, etc. So pathetic.