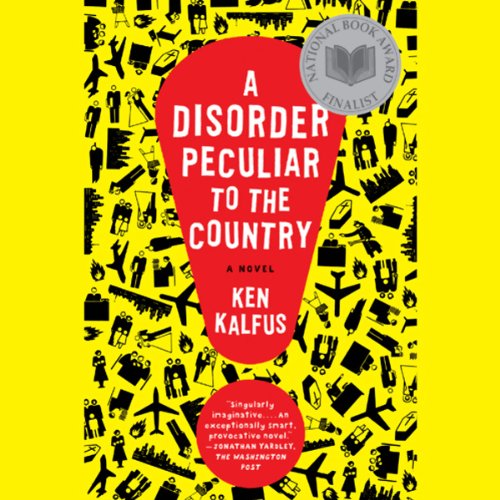 A Disorder Peculiar to the Country

Joyce and Marshall Harriman are in the midst of a contentious divorce, but still sharing a cramped, over-mortgaged Brooklyn apartment with their two children. On the morning of September 11, Joyce departs for Newark to catch a flight to San Francisco, and Marshall, after dropping the kids at daycare, heads for his office in the World Trade Center.

She misses her flight and he's late for work, but on that grim day, in a devastated city, among millions seized by fear and grief, each thinks the other is dead, and each is secretly, shamefully, gloriously happy. As their bitter divorce is further complicated by anthrax scares, suicide bombs, foreign wars, and the stock-market collapse, they suffer, in ways unexpectedly personal and increasingly ludicrous, the many strange ravages of our time.

In this astonishing black comedy, Kalfus suggests how our nation's public calamities have encroached upon our most private illusions.

"My inner idealist hopes Kalfus' novel joins the ranks of Fahrenheit 451 and 1984 on the required reading lists." (Philadelphia Magazine)
"Kalfus' new novel [is] like a fever dream of recent events....Through the interbleeding of public and private story lines and his lampooning approach, Kalfus [is] freeing the way we think about September 11....If hyperbole can be weaponized anywhere in literature, it is here." (Los Angeles Times Book Review)

What listeners say about A Disorder Peculiar to the Country

Kalfus weaves a darkly hilarious tale of a dying marriage set post 9/11 against the backdrop of Ground Zero. I enjoyed the deliberate reading by James Boles, which sometimes added to the author's wry humor. The story of Marshall and Joyce's divorce strives for analogy, to depict a microcosm of the paranoid, intolerant, inept, and violent new order of the reawoken world. In many ways it succeeds, and in one scene in which a loosey-goosey house party morphs into an eerily creepy parody evocative of the terrible high jinks uncovered at Abu Graib Prison, it is jarringly affective. I recommend this audio book to any fans of say George Saunders, T. C. Boyle, et. al., who enjoy a hearty laugh at the expense of some serious material.

This book is classed as a black comedy due to laziness in the book-blurb industry--a vestigial reference to the tragedy-tragicomedy-comedy spectrum that no longer scans for today's book-jacket shopper.

Any book with unique or singular situations that make you uncomfortable becomes a black comedy, and 'hilarious' ends up in its reviews and blurbs.

Does it find its audience? Personally I shop in this genre for a laugh. Are there readers who look here for dark, depressing books that will reinforce their sense that life is hard and useless? I doubt it.

I am writing this not to knock the book, but to provide fair warning to black-comedy fans. There are far too many books lumped into the black comedy genre, that are not funny at all, but with more care in promotion, would find a willing and appreciative audience. This is such a book.

This is a masterful book for people who enjoy the intake of profoundly numbing grief and disappointment in your fellow-man. Or, if you are able to look beyond the pain and go on to have a nice day, this book will satisfy.

The book evokes the communal sense of loss and bewilderment during the post-9/11 fallout, the futility of going through the motions to make life hum along smoothly. The paralyzing realization that one's own life is minuscule, and the perverse reaction: to mess things up even worse.

People who don't rally, don't set an example of heroism. People who responded to 9/11 like the rest of us: adrift, depressed, without purpose, feeling guilty for keeping on with their petty concerns and grudges, but going on all the same.

This is a stunning book. I purchased it on the blurb alone, knowing virtually nothing about the author. It is a very poignant, messy tale of a couple in disarray, in the middle of a great divorce, and a country that is about to be torn apart by terrorism. The manner in which the author melds these two themes and makes us care for his characters, who sometimes do despicable things, is nothing short of brilliant.

Couldn't Finish This One

I didn't enjoy this at all, and stopped listening less than halfway through. The characters were not likeable at all, and the story seemed to haphazzard to concentrate on.

Not Black, Not A Comedy But Still Good

So it looks like all the books that people wrote after 9/11 are now achieving publication. Some of the political dialogue worked well, but there was not enough on the dynamic of the family which was much more interesting.

This was a great read but only gets a "3" as IMO it fell apart at the end with unfocused, overdeveloped scenes and a pollyanna twist.

And, this is one of many recent books I've read with sound effects. Looks like it is becoming a trend and it doesn't work for me. I use audio books sometimes as a sleep aid and the between-chapter interludes wake me up! I hope audible stops this practice soon.

The best and most important books I've ever read have often made me uncomfortable and compelled me to question long held beliefs, behaviors, and values. This brilliantly written, dark, and frequently disheartening book will stick with me for a long time. Not an easy, relaxing read, it nevertheless was like a car crash;I couldn't turn away for very long.

This is not an easy read. One particular scene that stands out for me involves a bunch of disaffected white party goers. One of them pays a black youth to strip and do a slow dance (in exchange for "two Benjamins"). As the whites mock the youth, he struggles to retain his dignity. This is truly the worst that humans can do to one another. I wanted to stop reading--but couldn't.

Such was the case with much of this book. But it is worth sticking with. I agree with the other reviewer who insists this is not a black comedy; there is little to laugh at here. It is unquestionably dark, an uncompromising look at how we treat one another when we want what we want.

An important and thought-provoking work, Kalfus's book is beautifully written and well-narrated.

Terribly derivative and boring. Not reccomended.

Great start but straight off the boil

I like black comedy so this sounded up my street. And a great start - yep, looking good. But then it was just hours of utterly disjointed blathering - more like unconnected short stories than a novel. We get massive, forensic detail about a very short period then skip forward months as if they were all the same time span. Long sections about Joyce, barely registering Marshall then whack - flip round; all about Marshall and Joyce barely exists. Nothing came of the great potential of the talc / FBI; why bother to nick the hoopa if there was no consequence?; what a long and vulgar, and frankly depressing narrative of the party with Miss Naomi... I could go on but life's too short. But this book is not a good yarn, totally unstructured and... well, just not engaging. Next....