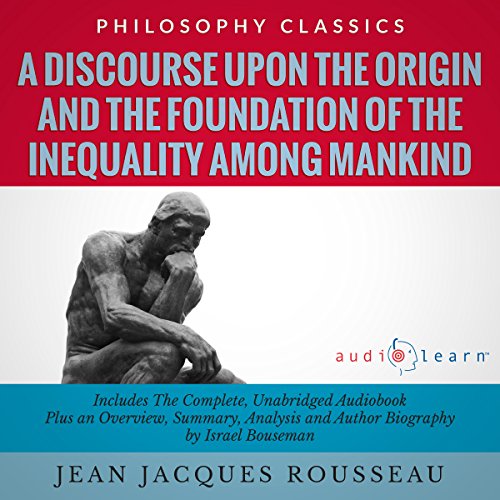 Rousseau was one of the key figures of the Enlightenment, a period in history when all aspects of politics and human rights underwent dramatic reinterpretation. His discourse on inequality is one of his earliest works, an examination of the state of nature of mankind and the way in which society fell short of both its ideals and its potential.

Rousseau was the most influential French writer of his age. His works gave rise to the ideals espoused during the French Revolution, and in no small part contributed to the American Revolution as well. Rousseau and his philosophical contemporaries, Thomas Hobbes and John Locke, were central to the dramatic re-envisioning of political theory that gave rise to the current era of democracy and republic.

This work shows the developmental stages of his thought, shedding light on the struggle between individual will and the right of the privileged to rule. The narration of the full text is preceded by a summary, which includes a biography of the author, and an overview, synopsis, and analysis, as well as an examination of the historical context of the piece. This version of the work is ideal for students of philosophy and history, and a must-hear for any interested in how the current political and social climate arose.

The performance was generally excellent except for the pronunciation of the names of some famous thinkers.

Rousseau is a good story teller and was certainly a very influential one. But it is interesting how his methodology of developing an argument would be laughable if a contemporary scholar attempted it. Of course, thinkers are supposed to be judged by the standards of their time....

An astonishing work, as relevant now as in the eighteenth century. Rousseau may have been an awful human being (there is good reason to think so) but he’s a devastating writer. No one will think about humanity in the same way after reading this book. The performance is not exciting, but the text provides enough excitement.