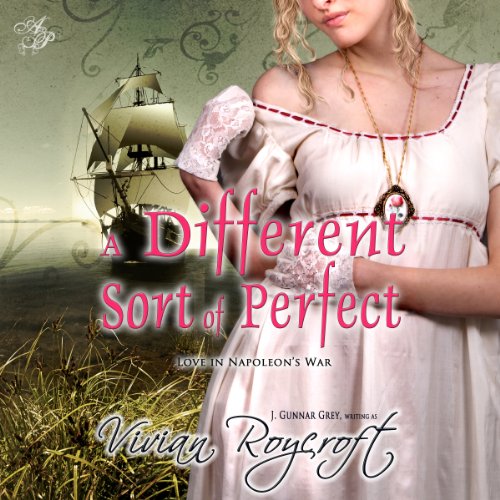 A Different Sort of Perfect

By: Vivian Roycroft
Narrated by: Redd Horrocks
Try for $0.00

Lady Clara Huckabee stows away by accident. But she's not sorry to sail aboard HMS Topaze, leaving England behind. It's a chance to search for her charming French suitor from the Amiens peace, the man she's determined to marry despite the war and her dominating uncle's disapproval. All she has to do is convince the Topaze's handsome captain to see things her way, and everything will be perfect.

A French frigate has evaded the Royal Navy blockade of Brest. Captain Alexander Fleming sails the smaller, elderly frigate Topaze in pursuit, but what he's supposed to do with a stowaway debutante for seven thousand miles wasn't covered in his orders. In the doldrums, during a South Atlantic storm, and with French t'gallants spiking the horizon, his first responsibility is always to his ship, his crew, his assignment... not his growing love for the woman doubling as his captain's clerk. Perfect; just perfect.

Before disaster strikes, before the cannons open fire, will Lady Clara and Captain Fleming realize that the perfections they longed for aren't the ones they really want?

What listeners say about A Different Sort of Perfect