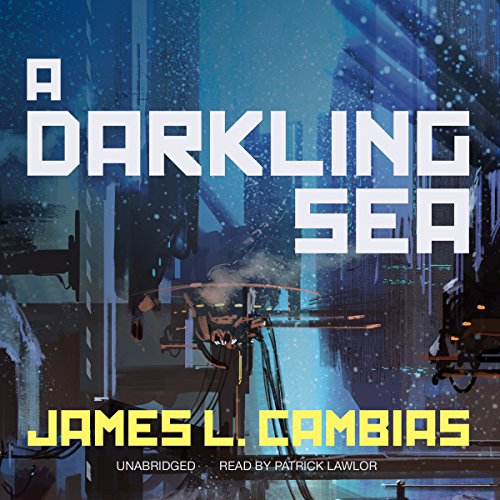 By: James L. Cambias
Narrated by: Patrick Lawlor
Try for $0.00

Beneath a sky of ice, three worlds collide.

On the planet Ilmatar, under a roof of ice a kilometer thick, a team of deep-sea diving scientists investigates the blind alien race that lives below. The Terran explorers have made an uneasy truce with the Sholen, their first extraterrestrial contact: so long as they don't disturb the Ilmataran habitat, they're free to conduct their missions in peace.

But when Henri Kerlerec, media personality and reckless adventurer, ends up sliced open by curious Ilmatarans, tensions between Terran and Sholen erupt, leading to a diplomatic disaster that threatens to escalate to war.

Against the backdrop of deep-sea guerrilla conflict, a new age of human exploration begins as alien cultures collide. Both sides seek the aid of the newly enlightened Ilmatarans. But what this struggle means for the natives--and the future of human exploration--is anything but certain.

What listeners say about A Darkling Sea

A Darkling Sea looked right up my alley: space adventure with a tale of alien contact, involving multiple alien races.

Humans, having discovered FTL travel, are currently sharing the universe (or at least our little corner of it) with the Sholen, a race that is significantly more technologically advanced than humanity, but has not fought a war in many generations, and only began pulling warships out of mothballs when they met their aggressive neighbors. This leaves the two civilizations in an uneasy state of detente, since neither knows who would win if it came to an interstellar conflict.

Caught in the middle of this situation is a research crew below the ice of Ilmatar, a world inhabited by a third sentient species, which does not yet know about the other two. The Sholen have dictated a protocol akin to the Prime Directive, forbidding humans to make direct contact with the Ilmatarans so as not to "contaminate" their culture. The human scientists, of course, chafe under these restrictions, but no one wants to test the Sholen.

Then a biologist/celebrity who forced his way onto the Ilmatar expedition pulls one ratings-grabbing stunt too many and suffers a Steve Irwin demise, dissected by curious Ilmatarans who do not realize they are dealing with a sentient creature.

This brings a Sholen team to Ilmatar to investigate what happened and determine if the humans are violating protocols. If they are, they will of course order the humans to leave Ilmatar. The idea that the humans might say "No" does not occur to them.

There are three stories here that converge: we meet the humans, the Sholen, and the Ilmatarans. The Sholen get the least attention, as there are only a few named characters and only two who are viewpoint characters. The description of them is also somewhat vague; they are six-limbed, mammalian, and larger and stronger than humans. Their culture is consensus-based, with almost all interactions being sexually charged and establishing dominance and submission. And yet they constantly describe the humans as "hierarchical" when it seemed to me that the Sholen were much more so.

The Ilmatarans, who live blindly in the depths of a freezing ocean, live in a pre-industrial society that has invented literacy and the deep-sea version of agriculture, but not gotten much further. However, several of the Ilmaratan characters are budding "scientists" who of course will become the ones who make first contact with creatures from beyond the ice.

I liked the description of the primitive and alien technology that deep-sea aliens would have to use, and their perceptions of the universe through their non-visual senses. This is classic sci-fi worldbuilding. I can't quite give Cambias full marks as at times, I think the Ilmatarans remained a bit too human-centric in their descriptions and while they were alien, they were awfully close to human in psychology. The Sholen, too, were alien but not alien enough to convince me they weren't humans with odd bodies and social customs.

However, the worldbuilding was more than serviceable and the story progressed in a logical fashion to a decent climax. I don't know if Cambias has any sequels planned; there is certainly room for one (especially with the "big reveal" at the end which I thought was telegraphed pretty early on), but the story doesn't really have any loose ends that would require one.

A Darkling Sea harkens back to more classic planetary adventures, and will satisfy anyone who liked novels like Dragon's Egg by Robert L. Forward, Warhorse, by Timothy Zahn, or many novels by Alan Dean Foster and Larry Niven.

good story. not the right narrator

its an amazing premise. the story itself doesnt quite live up to its potential. the narrator sounds like he's reading a childrens book. not bad but not right for this story.

An imaginative take on the issues of our day. But what I read liked was how the author really captured a culture so foreign from our own but logical in execution. One of the best scifi books I've read in a while.

I couldn't keep up with the narration. It isn't bad just seems cartoonish and exaggerated. It would be right at home for a children's book. It took me out pretty early in the book. The story wasn't much better, forgettable considering the interesting premise.

I adored the three perspectives, particularly the alien perspectives! Exploring this frozen ocean moon was an incredible adventure.

Great story. While I found the reader to have a good delivery, he did not have enough variation in the voices to cover so many characters, as a result I was not always sure which character was speaking. context and written indicators helped, but it is nice to be able to recognise the voices as distinct.

Where does A Darkling Sea rank among all the audiobooks you’ve listened to so far?

What was one of the most memorable moments of A Darkling Sea?

Which character – as performed by Patrick Lawlor – was your favorite?