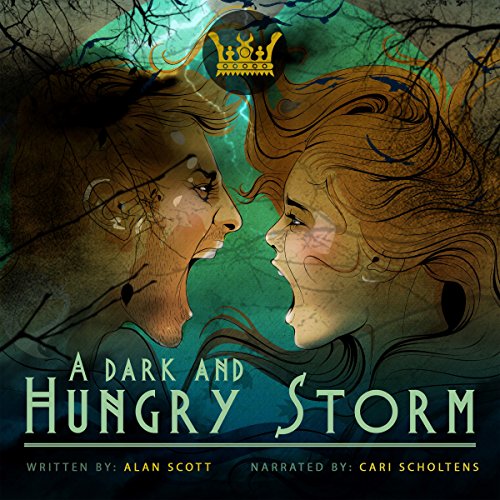 A Dark and Hungry Storm: (The Werewolf Reborn): A Dark Fantasy Novel

By: Alan Scott
Narrated by: Cari Scholtens
Try for $0.00

A Dark and Hungry Storm is the third and final installment in the Storm Series Trilogy and draws this classic tale to an end.

Jack Rothgal desperately attempts to fulfill his destiny and become the Ultimate Spirit Warrior and regain the Twin Kingdoms for his little sister. Deep within her palace in the city of Deep Lake, Queen Rebecca Rothgal works tirelessly to protect the Twin Kingdoms against all threats, including her big brother. And as the Rothgal family feud rages, the Year of Blood fast approaches; the hidden forces hinted at in Scions of the Storm finally make themselves known, and nothing will be the same again.

Meanwhile, in a forest in the far north of the kingdom, something long thought dead stirs and stretches, as a demonic and chilling sound emits from his heavily scarred face.

What listeners say about A Dark and Hungry Storm: (The Werewolf Reborn): A Dark Fantasy Novel

There are a few twists in this part, as there are throughout the story, but it somehow feels more epic now. Perhaps that's because the story was coming to a conclusion. It's been a good journey. The characters seem to crash against each other rather than just interact. Whenever a scene starts, you're not sure who will be left standing by the end of it.
Like the other books in the series, you get taken to some dark places but it feels organic to the story and the story world, rather than just being gratuitous.

Cari Scholtens has narrated the entire series and her performance is every bit as good in this book as it's been throughout. She has such a rich voice and a great way with the characters.