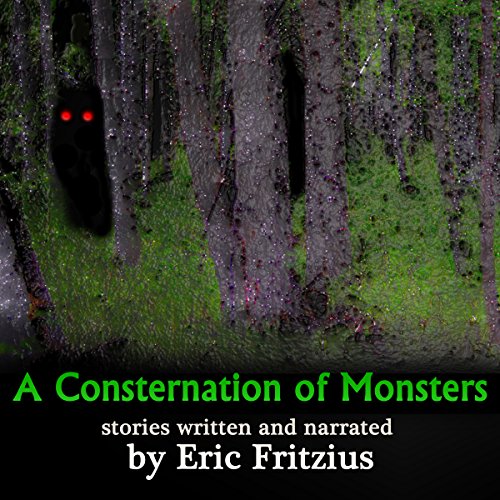 A Consternation of Monsters

Within this collection of short stories you will find a variety of monsters - a whole consternation of them, to use the collective noun. In these tales, a creature of make-believe proves difficult to disbelieve, a trickster-god takes an unkindly interest in witnesses, eldritch horrors can be summoned with a quilt, frustrated wolves face dangerous prey, the angel of death wears a plaid sport coat, wise old women are to be feared and heeded, Elvis remains king, the corpses of legends can be perilous to have around, and where one of the most powerful and potentially dangerous objects in the world is a fork.

Eric Fritzius is writer, playwright, teacher, and actor of stage, screen and US and Canadian basic cable. His stories have appeared the anthologies Mountain Voices, Dark Tales of Terror, and Diner Stories, as well as in Greenbrier Valley Quarterly Magazine. Eric lives in Greenbrier County, West Virginia, with his wife and his dogs.

What listeners say about A Consternation of Monsters

This is perhaps the lamest scary book I've listened to to date. It's like H. P. Lovecraft's talentless cousin, Bubba Lovecraft, wrote it. Only Bubba don't got no skill at writing. Bubba doesn't know how to mesh the fancy long words to form those Lovecraftian sentences that caused nightmares for those souls brave or stupid enough to read H. P. 's tales of terror, tales that inspired many modern writers of the horror genre, including Stephen King. No. This "scary" book is just silly background noise that may induce fear in a preschool child. And a complete waste of time.
As far as narration goes... it's hard to give a fair critique of anyone, including the author, having to spout this dribble. So I don't know about narration. I couldn't get past the absolute childishness of these silly stories.
Give up writing horror, Bubba Lovecraft (a. k. a. Eric Fritzius). Find an honorable line of work and leave horror to those who know how to write it. The only scary part of this mess is the horror of losing a credit & wasting time listening to it.