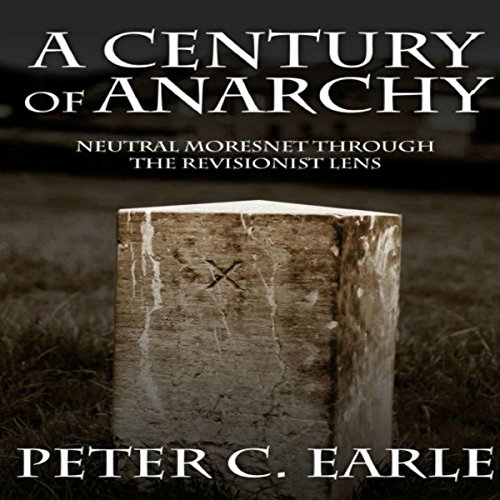 A Century of Anarchy

By: Peter C Earle
Narrated by: Timothy McKean
Try for $0.00

Could a community without a central government avoid descending into chaos and rampant criminality? Could its economy grow and thrive without the intervening regulatory hand of the state? Could disputes between citizens be settled if there existed no state monopoly on legal judgments?

Apparently, the answers to these questions are yes, yes, and yes. Indeed, if the strange and little-known case of the condominium of Neutral Moresnet - a tiny wedge of disputed territory in northwestern Europe - acts as our guide, we must conclude that statelessness is not only possible but beneficial to progress, carrying profound advantages over coercive bureaucracies.

The remarkable enterprise that was Moresnet was an unintended consequence of the Napoleonic Wars (1803 - 1815). Created as a triangle of neutral territory between Prussia and the Netherlands by the Congress of Vienna, Moresnet encapsulates the archetype of market anarchy.

Hidden in its history, we find privately produced, commodity-backed money; competing avenues for the administration of justice; negligible - and, it seems, entirely avoidable - taxes and fees; few, if any, regulations; a defense force without a standing military; open borders (however unintentionally); and an irrepressibly entrepreneurial spirit.

What listeners say about A Century of Anarchy

A fantastic piece of obscure but important history

Would you consider the audio edition of A Century of Anarchy to be better than the print version?

I would say that the two should go hand in hand. I hope the Kindle becomes Whyspersynch enabled.

What other book might you compare A Century of Anarchy to and why?

I would compare it to "Beyond Democracy" by Frank Karsten, because they both challenge the legitimizing narratives used by states to justify their existence.

It made me very sad hearing the story of how Moresnet was eventually occupied and dissolved.

This is a short but important work that should be of interest to those who are interested, not only in history, but political economy and social change. In our present age of nationalism and increased centralization, Moresnet provides a stateless model for a decentralized, alternative future. Imagine a Moresnet with high speed Internet, Bitcoin and 3D printers!

What made the experience of listening to A Century of Anarchy the most enjoyable?

The narrator did a great job with this fun, insightful, short book on the quirky, serendipitous, inspiring history of a briefly semi-stateless place: Moresnet.

The fact that the size and prosperity of the community kept growing over time, while the size, scope and importance of what little government it had kept shrinking.

This was non-fiction, show this doesn't really apply.

The loss of their independence in the end.

Well worth listening to! Very thought provoking. Reminds me in some ways of what 's going on with Liberland in 2015.

A Micronation with a Microgovernment

What did you love best about A Century of Anarchy?

That it wasn't too long or too short for the topic.

What was one of the most memorable moments of A Century of Anarchy?

The introduction, because it asked three important questions and explained why Neutral Moresnet shows that the answers are "yes".

This was Nonfiction / History, so this question doesn't really apply. However, Timothy McKean did a great job.

The loss of Moresnet's independence.

In the absence of big government, this micronation was able to prosper and grow. It was truly a peaceful, multicultural society. This book contains a lesson that small is beautiful, which unfortunately many on the Left today have forgotten.

A concise, yet thorough, account of a stateless society, which shows how such an idea is possible.

too short but other than that great

is as advertised. wish question anticipation was included. this is what makes it too short. if some effort was given to different audiances that will have questions it woulda felt more complete. this reads more like an english essay although really well done.

A clear anf well-expressed documentary of the benefits associated with a lack of state control.. Freedom!

Packed with great information in a short format. Timothy McKean does a great job narrating this.

Neutral Morsenet was a CONDOMINIUM, not an anarchic territory; nor was it unique, as there have been dozens of such shared territories throughout history. It's perilous existence during a time of rapacious nationalism was precisely because of it being protected and loosely governed by two formidable empires - the Dutch and the Prussians. What little self governance it had was in point SELF GOVERNANCE. It lasted a mere 100 years because it had no cohesive identity, save a romantic association with the newly invented language of Esperanto.
The author parcelled together a hopelessly shallow analysis of Morsenet, drawing conclusions from little data and lots of romantic notions. It reads like an undergrad history paper.

Thoroughly enjoyed this story of an anarchic system working! Inspirational in times of flawed 'democracy'.