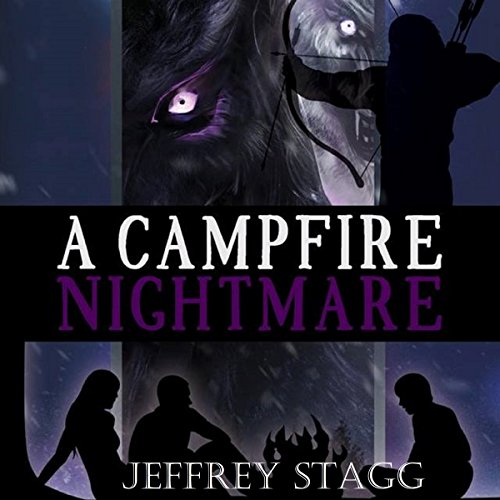 Despite his almost-supernatural drumming abilities, Jimmy and his best buddy, Michael Munday, quickly find themselves mocked and bullied by campers from wealthier families. If these kids are to be believed, riches trump actual talent.

Then, Rox shares the legend of the Flathead Native Americans' battles against twisted monstrosities lurking in the woods. It would be a great ghost story - if Jimmy and Michael hadn’t noticed that something is indeed stalking the camp in the dead of night. Only a mysterious, pale mounted figure seems to stand between the campers and whatever lurks in the darkness.

As the beasts in the woods grow increasingly restless, Jimmy and Michael try to focus on their music to prove to other campers that talent knows no economic boundaries. As for Rox, the camp director has his own secrets - secrets that might change the two young campers' lives forever - unless what’s in the woods gets to them first.

A fun listen, through and through!

This story was fun. It had the same delight and wonder factor as Harry Potter, with kids from a poor background being suddenly introduced into a marvelous new setting: a summer camp where they have the opportunity to learn how to play music from some of the most brilliant musicians in the world. And yet, something dark and mysterious lurks in the background, and the adults refuse to give them answers....
Part of me wants to categorize this as urban fantasy, but it's not quite that, since nearly the whole book takes place at a summer camp deep in the woods. The setting was very interesting to me, and even inspired me. It made the concept feel fresh, whereas a story involving werewolves that took place in the city would feel a little ho-hum.
The characters were incredibly well-developed as well. Impressively so for YA. I really came to like every protagonist. The story focuses mainly on two male characters, but also has two female characters that really shine. I enjoyed every moment with them (and several others).
I also appreciated that this was a clean, all-ages story, even though my first impression was that it would be a little grim-dark. It does have some creature violence, but it's still a book that older kids could listen to and enjoy.
The story wasn't without fault, though. I really think that 10-15% of the story could be cut out if the author just didn't use superfluous wording. There are countless times when one sentence would say something, and the following sentence would say nearly the same thing in a different way. And there are other times when characters or things that had little to no bearing on the plot were described in an unecessary amount of detail. I think that if these superfluous details were cut out, the story would feel more fast-paced and punchy. I'm hoping that improves a bit on the next book.
The only other fault was that the book was also bogged down at times by unnecessary perspective shifts. The book has an omniscient perspective, and certain scenes are slowed down by us hearing multiple character's takes on what's going on when using just one viewpoint would actually make the narrative stronger. All these flaws could have been fixed with another round of editing, I think.
In short, the story itself was great! The characters were engaging and lovable, and I can't wait to spend more time with them in the sequel. I hope we can get more answers on all the mysteries that were opened up in this book. I'm hooked.