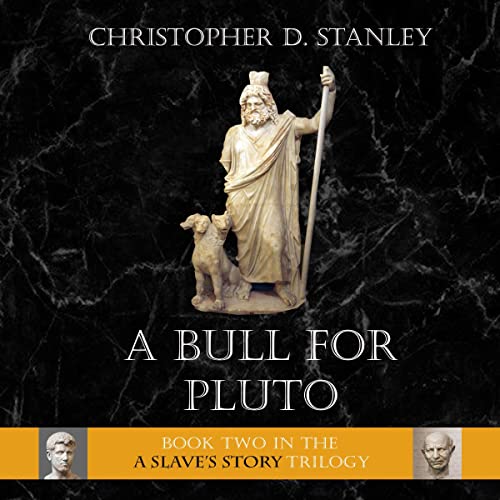 A Bull for Pluto

A Bull for Pluto, the second book in Christopher D. Stanley’s A Slave’s Story trilogy, continues the story begun in Book One of the series, A Rooster for Asklepios.

Book One tells the story of Lucius Coelius Felix, an aging aristocrat in the Roman colony of Antioch-near-Pisidia in central Asia Minor (modern Turkey), and his trusted assistant, a slave named Marcus, as they encounter a series of unfortunate events that derail Lucius's plans for social advancement. A nagging abdominal ailment and an encouraging dream lead Lucius and Marcus to embark on a fateful journey to Pergamon in western Turkey to visit the sanctuary of Asklepios, the Greek god of healing, where Lucius expects to be cured.

Book Two follows the aftermath of this visit. Rather than returning home to his pregnant wife Selena, the dispirited Lucius announces his intention to visit the city of Hierapolis to bask in the healing waters of the city’s renowned hot springs. While there, Marcus meets a young woman named Miriam who challenges him to embrace the recently revealed secret of his family history rather than running from it as he is inclined to do. Marcus is torn between his budding love for Miriam and the potential cost of following her advice.

A tragic decision by Lucius seals their fate as their attention must now be devoted to preserving Lucius’s life. They reach Antioch in time to learn that Lucius’s son Gaius has miserably abused his father's household while Lucius was away. If Lucius should die, Marcus, Selena, and her unborn child will be at the mercy of this tyrant. To fend off this danger, Lucius must tell Marcus the painful truth about his past, a truth that will ensure Marcus's future at the cost of his master's honor. Can he bring himself to act before his inevitable end?

Christopher D. Stanley is a professor who studies and writes about the social and religious history of the Greco-Roman world, with special attention to early Judaism and Christianity.

What listeners say about A Bull for Pluto