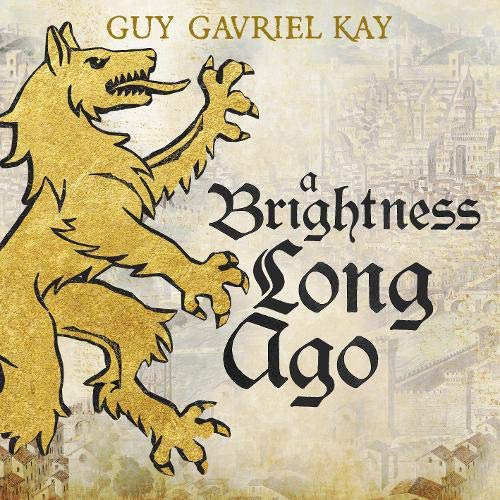 A Brightness Long Ago

By: Guy Gavriel Kay
Narrated by: Simon Vance
Try for $0.00

In a chamber overlooking the nighttime waterways of a maritime city, a man looks back on his youth and the people who shaped his life. Danio Cerra's intelligence won him entry to a renowned school, though he was only the son of a tailor. He took service at the court of a ruling count - and soon learned why that man was known as The Beast.

Danio's fate changed the moment he recognised Adria Ripoli as she entered the count's chambers one night - intending to kill. Born to power, Adria had chosen a life of danger - and freedom - instead.

Other vivid figures share the story: a healer determined to defy her expected lot; a charming, frivolous son of immense wealth; a religious leader more decadent than devout; and, affecting these lives and many more, two mercenary commanders, whose rivalry puts a world in the balance.

A Brightness Long Ago offers both compelling drama and deeply moving reflections on the nature of memory, the choices we make in life, and the role played by the turning of Fortune's wheel.

"One of the (if not the) premiere fantasists of our time." (The Financial Times)

What listeners say about A Brightness Long Ago

It may not be Guy Gavriel Kays best book, bit I dit love it. I listened it before I read id. What made the experience truly wonderful was the way it was read by Simon Vance. Het is a true storyteller.

Engaging from the first minute, a story of Italy at the dawn of the Renaissance. Only one advise. get it

storytelling at its finest

Kay peaked somewhere between Lions and Sarantium but this was an enjoyable enough story. The performance, on the other hand, was dreadful. The voice actor was just about appropriate for the first person sections but not for the rest of the narrative. Any attempts at women's voices sounded like caricatures, which is a crime, as Kay actually writes decent women characters.

This is the first time I have listened to one of GGK's books rather than read it, and I had a little difficulty at first settling to the narrator, but that passed and I have enjoyed it. It is set within the world of Sarantium (although can be read as a stand alone story) and I am contemplating picking up some of my older books to relive their stories.

Just another fantastic story . Full of insight. Impatiently waiting for the next book.
" write faster GGK".

Not Kay at his very best, but still majestic.

Such an incredible author.

Nobody else can weave history into fiction quite as adroitly. Highly recommended.

I love the book but CANNOT DOWNLOAD THE AUDIBLE VERSION -YOUR INSTRUCTIONS ARE NOT WORKING. The

only way I can listen is on my computer.

Beautifully crafted, poignant tale of adventure. The book describes a sophisticated and dangerous world where one's every move are a matter of life or death. The narrator is gifed and a very good choice. This was my first audio novel. I will buy another audio book by this author for sure.