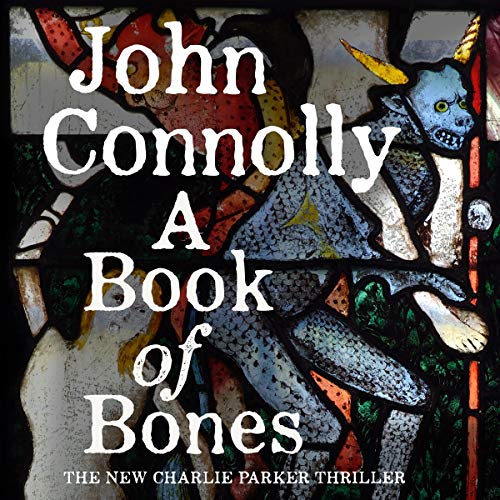 A Book of Bones

By: John Connolly
Narrated by: Jeff Harding
Try for $0.00

He is our best hope.

He is our last hope.

On a lonely moor in the northeast of England, the body of a young woman is discovered near the site of a vanished church. In the south, a girl lies buried beneath a Saxon mound. To the southeast, the ruins of a priory hide a human skull.

Each is a sacrifice, a summons.

And something in the darkness has heard the call.

But another is coming: Parker the hunter, the avenger. From the forests of Maine to the deserts of the Mexican border, from the canals of Amsterdam to the streets of London, he will track those who would cast this world into darkness.

What listeners say about A Book of Bones

First attempt at Audible and with a book from the series I have loved since it began. Fabulously written as always and wonderfully narrated (although the Northern accents need some work 😉) Definitely an Audible convert!!

I was enjoying the book until it arrived in England.

I love John Connolly. He does not deserve for his books to be ruined by such a terrible English Accent. I had to stop listening and returned the book. I will go and buy a hard copy to add to my collection and read it. Such a shame. I have a mix and much of audible and paper Parker books and the previous audible books have worked. Would have worked better with an English reader for the English characters. I think the accent was supposed to be Geordie, my wife thought he was Scottish. As always Audible refunded without a quibble, so thank you. But feel I still need to give an honest review.

I wanted to love this book I waited so long for.

It was great to have another instalment of Charlie Parker and I thought I could listen to Jeff Harding read from the phone book because earlier books have been so good.....BUT...this story has so many plotlines set in so many places that two frustrating things happen.

First we don’t get enough time with Parker, Louis and Angel. Second Jeff Harding, great though he is, is TERRIBLE at the range of UK accents he is forced to tackle. Both things were seriously upsetting to a diehard fan.

So. As I said. Seriously conflicted. I’ll keep listening, but it won’t be the highlight of the Audible year anymore, unless Parker loses his passport maybe?

Great book but a little hard to listen too

I have read and listened to all the books by John C. The narrator normally does an excellent job but an English ear his English accents are awful. It make it hard to listen too. I also noticed a couple of anomalies in the English location. For example the lead police officer is a deputy inspector— a rank that doesn’t exist. Also the pathologist report included inches instead of cm. I will check my English written copy to see if this is just a case of the US version of the book being read.

I'm from Gateshead and as a Geordie the awful accents ruined this for me. I was excited that the setting was partly north east England, and I hate to say anything negative but the whole idea of an audio book is to get the pleasure of reading a book by listening. As such, accents are really important. This should have been so much better.

This has to be the worst accent ever of people from the North East of England. Being of the region myself I couldn’t continue us listening for laughing .
The rest was great. Maybe just don’t try next time ...

Found this hard going, story line going off on another track for far too long. No way near enough of Parker and co and lastly the "British" accents were dreadful 😪 shame. Still trying to finish it but close to giving up sadly.

Great, creepy story only spoiled by a career worst performance from the awful Jeff Harding. He should not be attempting regional British accents, and his conversation between two female characters is the wrong sort of hilarious.

I love the author and narrator - Jeff Harding is a definite favourite for me - HOWEVER, his attempt at a Newcastle accent absolutely spoilt this book for me. It was very poor, so much so that I started this book three times, but could not get through it due to the indescribable sounds of a fairly important character. This is the first time that I actually feel like asking for a refund - how on earth it got past the reviewers/recorders is staggering. I am still at a loss about the outcome of this story - apologies to Mr Connolly, I'm sure it's as good as all your other books I have both listened to and read in audio and hard copy. Shame on whoever allowed Mr Hardings' poor attempt at a regional dialect to be given the thumbs up - it definitely gets a THUMBS DOWN from me!

The attempts at recreating the accents are so bad that it's put me off listening to the book. Terrible. Story is good however.

It's a great series and Harding is a great narrator. However this book is based in England and Harding's attempts at English accents, especially Northumbrian ones, were absolutely appalling, to the point of being laughable and then painful and a distraction from the story. Surely someone could have invested in a voice coach for him? It really let the whole book down. On top of which, there was too much about new English characters and not enough about Parker, Angel and Louis. Shame.

As a person from Northern UK, the attempt at northern English accents were terrible but made me giggle.
Story was clear and was a good follow 9n from previous book.

I love this series and usually really enjoy the American narrator. I am an Aussie, not British, but even for me listening to about half of the story in a really poor British accent was just painful. The story is fantastic but so let down by the narrator - possibly wouldn't be as painful to ask American audience, not sure.

Everything about this story and narration is excellent... except for the UK accents. Every other accent is on a scale of decent to good. The UK accents are mostly rubbish.

Not up to earlier Charlie Parker books by a mile

22 1/2 hours? This book lost its way, needs much more Angel and Louis, and the humour that comes with them, and although this is part of a series, having this book carry over the same set of baddies from the previous book does not work for me. I prefer each book to stand alone sort of, with the same heroes and different baddies. The book was padded out to almost twice as long as previous Charlie Parker books and became tedious and repetitive to listen to. So sick of the two children, I would like to see Charlie become what he is meant to be (Angel, Alien or whatever) and move the series along or go back to stories like one of his best in the series "The Lovers" as well as many of the early books. Not impressed at all despite waiting with anticipation for this book.

Another solid entry into the Parker mythos. What I like the most about this entry is how Parker, Angel, Louis leave the well-worn shores of the Pacific Northwest and travel abroad, all the while hunting an old enemy. Book Of Bones ties up a lot of loose ends from previous novels, as well as incorporating Connelly's world building from Night Gallery: Noctures 2 (which I'd suggest reading first). The only major issue I have - and have had - is the narrator's voice. I'm not sure what it is; perhaps too nasal? I personally find it jarring and would like someone else to have a crack.