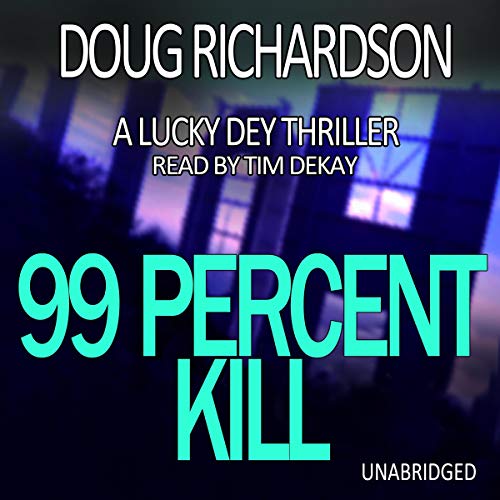 By: Doug Richardson
Narrated by: Tim DeKay
Try for $0.00

When the real enemy is closer than you think....

Lucky Dey is at it again. This time, the on-again/off-again Los Angeles cop is more willful and acerbic than he's ever been before. Awaiting his official reinstatement, Lucky accepts a one-time gig to track down the missing teenage daughter of a Midwestern millionaire.

Determined to find the girl, Lucky tangles with Tinseltown’s dark underbelly to locate the millionaire's daughter. Winding his way through an L.A. landscape where the lights are bright but reality can be murky and perilous, Lucky is trapped in a trafficking web, entangled with vile human predators. But bringing the girl home safely becomes more dangerous than he expects. For the first time ever, the payoff might not be worth the price.

What listeners say about 99 Percent Kill

The Dark Side of LA

99 Percent Kill is the second book in the Lucky Dey Series of dark Mystery Thrillers by Doug Richardson and it was released in audiobook format this July, about 4 years after its original publication. This is another well written, immersive and highly entertaining novel from an author I enjoy more and more with every new story of his that I listen to.

Los Angeles, City of Angels, city of hope, city of runaways, city of monsters and city of broken dreams…

When a billionaire contacts Lucky Dey and asks him to help a millionaire find his runaway daughter as a personal favor, the LA cop, now between jobs, decides to give it a try. Starting his own investigation into the teenager’s disappearance, Lucky finds out that things aren’t always what they seem at first look.

What follows is a story that will keep the listener on the edge of his seat, rooting for the good guys, and hating with all their heart the monsters that are cruising beneath the surface of this great american city. There are girls looking to make a living on the streets, in the strip clubs, there are casting agents promising celebrity, there are drugs, drinks, weapons, prostitutes, gun fights, car chases, heartbreak and, of course, murder.

I was pulled into this world created with talent by the author for the 10 hours or so of the audiobook and at the end I was left mouth hanging open, shocked and trying to recover my senses, trying to understand exactly just what happened.

Tim DeKay, a renowned actor that had important roles in several TV shows, movies and theater productions returns once again to the mic as the narrator for this series and brings to life its characters with love and passion.

With a performance reminiscent of those delivered by the amazing Dick Hill, now retired, Tim infuses the story with urgency and emotion, delivering a completely immersive narrative experience. If I didn’t know that 99 Percent Kill is just the second audiobook recorded by Tim DeKay, I could have sworn that he must have at least a few hundred of them under his belt. But, that shows that where is love and passion for the work that you are doing, good things come out of it.

Where Blood Money was just a great first book in this series, 99 Percent Kill is a strong second novel that adds much needed character development and makes the reader / listener care deeply about those involved… If you like dark mystery thrillers, you can’t go wrong with this one! The good news is that more books in this series will be released as audiobooks this year.

Oh, yeah, and one more thing! Doug Richardson has written in the past such movies as Die Hard 2, Bad Boys and Hostage, so you can bet that he knows how to tell an entertaining story.

Please vote Helpful below if you Like this review and find more of them here and on theAudiobookBlog dot com.

99 Percent Kill is a buckle your seatbelts nightmare adventure of rescuing the hottest damsel in distress in Los Angeles.

The abduction prompting the rescue is so insidious 99 Percent Kill, inseminated with its dark, spirit-crushing backdrop, is probably the author’s most skin-crawling and monstrous thriller making it one of the hardest novels of the whole of the Lucky Dey series to initially pick up and go all in enjoying.

At the same time, 99 Percent Kill red lines the thrills and chills into instantly sparking an inextinguishable burning desire for wanting to find out what is going to happen next.

So much so, this epic saw of sorts is impossible to keep down for long.

DeKay’s intonation of Richardson’s characters is terrific. The voicing of Lucky’s snarl and low growl persona is spot on. Herm, the finely-aged but dangerous flesh trader sounds exactly how I envisioned him from the text. And Andrew, the impulsive and demanding king prick of entitlement who’s also the father looking for his daughter is captured perfectly with DeKay bringing him to life with a whiny, nasal rendering.

99 Percent Kill opens your eyes to the horrific evil reality of sex trafficking and the perverse, unholy sexual addictions by corrupt people in power. And the brighter the light of awareness is on such crushing evils, the more it will shrivel to nothing and be kept at bay, which is why 99 Percent Kill is an 100% must listen.

You hard on thinking not?