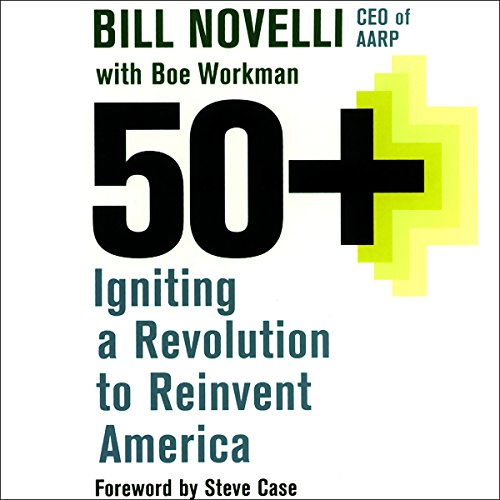 Bill Novelli doesn't believe that retirement has to mean rocking one's way into the sunset. As the head of the strongest organization of retired people in the world, the AARP, Novelli believes that retirement can be a time of action and influence rather than one of illness and decline.

In this inspiring book, Bill Novelli will speak to the growing number of Americans age 50 and older about what they can do to shape the national debate about aging and influence government policy towards retirees. For a long time, many of the government forces in Washington have hoped to divide the nation along various lines, and one of those dividing lines is age. Against this "divide and conquer" mentality, Novelli will argue that the common, shared experience of aging will serve not to divide the US, but to unite it. And the united tide of change is potentially enormous: when the Baby Boomer generation ages to the 50-year mark, they will create the largest group of retirees in the history of the country, solidifying a powerful constituency for major change in ways beneficial to the entire nation.

Novelli believes that this group is capable of just about anything. 50+ is a rallying cry for an aging America by a man who knows how to get the job done.

Author, Bill Novelli, is in charge of the strongest organization of retired people in the world, the AARP, and he’s taken the time to share some his thoughts on the incredible impact and influence that all of us baby boomers can have on today’s economy.

This book provides an important look at the baby boomer generation, who are now hitting 50+ years of age, and the critical mass and the difference they can make throughout society.

The first baby boomers turned 65 in 2011. Healthcare reform is going to be a huge item that baby boomers can really make a difference and help rinses shaped the look and feel of how that’s going to work for everyone. Other issues such as retirement and longevity, career changes and working longer, education and our role as caregivers (whether it’s for our elderly parents, or our younger children) are all going to be real life issues for baby boomers to have to deal with.

Boomers now are of such critical mass, that they can impact and direct policy changes that will be for the betterment of this country. Changes can come about in the form of and in regards to education, business, retirement programs, transportation, housing/residential and so many other essentials throughout our communities.

Being a baby boomer myself, I look excitedly towards the future of all the wonderful opportunities that are going to be made available to me. It’s up to me of course to position myself for those opportunities to come to fruition.