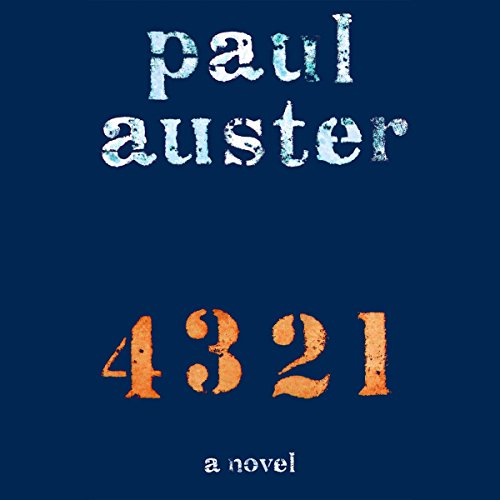 Paul Auster's greatest, most heartbreaking and satisfying novel—a sweeping and surprising story of birthright and possibility, of love and of life itself: a masterpiece.

Nearly two weeks early, on March 3, 1947, in the maternity ward of Beth Israel Hospital in Newark, New Jersey, Archibald Isaac Ferguson, the one and only child of Rose and Stanley Ferguson, is born. From that single beginning, Ferguson's life will take four simultaneous and independent fictional paths. Four identical Fergusons made of the same DNA, four boys who are the same boy, go on to lead four parallel and entirely different lives. Family fortunes diverge. Athletic skills and sex lives and friendships and intellectual passions contrast. Each Ferguson falls under the spell of the magnificent Amy Schneiderman, yet each Amy and each Ferguson have a relationship like no other. Meanwhile, listeners will take in each Ferguson's pleasures and ache from each Ferguson's pains, as the mortal plot of each Ferguson's life rushes on.

As inventive and dexterously constructed as anything Paul Auster has ever written, yet with a passion for realism and a great tenderness and fierce attachment to history and to life itself that listeners have never heard from Auster before. 4 3 2 1 is a marvelous and unforgettably affecting tour de force.

"...listening to 4 3 2 1 in audio is worth the commitment, thanks to the author’s easy-on-the-ears baritone" (Newsday)

Obviously Auster is a a very talented writer. He brought the protagonist to life and I liked the multiple pathways. But so often, he had long lists of items or things, e.g., "Ferguson didn't like to eat vegetables - he didn't like cabbage, he didn't like eggplants, onions, celery, green beans, red peppers, bok choy, snap peas, zucchini, or avocado." Also, included long play-by-plays of baseball games from 4 decades ago. And then in the middle, a short story about shoes? Some editing would have been helpful.

Paul Auster has written a both technically and creatively wonderful book. That I as a Norwegian woman in her twenties would be so swept up in the coming of age stories of a young Jewish boy in the sixties was beyond my expectations. But, I loved ever minute of the book and was sad to see it end too soon! which was surprising after more than thirty hours in Auster's universe. The book is a classic American monstrous novel, yet it all works out. it is not a book for everyone, and require a certain degree of patience from the reader. However it is so worth paying attention to all the details, as they truly contribute to the story as a whole. The literary references throughout will be engaging for most with a literary interest, and the descriptions of contemporary politics and social movements are captivating. especially as a non American one feels like the book can provide a greater understanding of America life and values.

Narration should be left to a professional

Mechanical. I’ve always assumed that no one would be more qualified to transform text into speech than the author him/herself. I was clearly mistaken - this should be left to a professional. I reverted to the printed version on my Kindle after only an hour or two of listening to this otherwise excellent novel by Mr. Auster (have been a loyal and enthusiastic follower of his output since NY Trilogy). I prefer listening to the voice inside my head in the long run.

What made the experience of listening to 4 3 2 1 the most enjoyable?

I really like the fact that it was read by the author, so that I was able to hear the cadence in which it was meant to be heard.

I would compare this book to City on Fire and A Little Lie both of which I would really recommend.

I actually loved the performance but I did speed it up to 1.25x which resulted in a slight octave raise to the narrators voice. This made it a little easier to relate to him being a young man. He also did not attempt to fein female voices.

If you are to purchase this novel, be ready for the long haul. I listened to this over a period of 3 days and couldn't put it down. This was my first Paul Auster book and I definitely don't think it will be my last.

There have been a number of door stopper epics that have come out over the past couple of years but this is the only one I would consider a classic. Auster manages to give a beautiful emotional rendering of lives lived and possible; history of mid- 20th century America and how it echoed in people's lives; a philosophical/ psychological work in how we construct a life. I will reread this many times ( I hope). The author's reading is pitch perfect.

For some reason I listened to this book all the way to the end, although I pretty much hated it. The character Ferguson is so unappealing and his adventures so ordinary and uninteresting that I barely made it through. I could not figure out what the point of the book was. Was it autobiographical? That is not clear. (spoiler) Why did 3 Fergusons have to die unnatural deaths?

The neverending love affairs of the different Fergusons also are entirely pointless. Why go through the trouble of describing all the different women's names and backgrounds if they disappear from the story one page later? It feels like filler material. And the homosexual activities of one of the Fergusons were just unbelievable, since they were so different from the other Fergusons.

Perhaps Ferguson was so unappealing because he is in every story highly self-absorbed. There is no indication that he cared about his friends and family or even has any emotions at all. His big love interest Amy disappears from his life in all 4 versions, because Ferguson can't be bothered to put any effort into the relationship.

The author read the novel himself on Audible, which is admirable, but he is just not a very good reader. I kept thinking that a more energetic performer would have made a big difference.

Unfortunately, I will not be reading any other Paul Auster books after this experience.

This is my life--by and about Paul Auster

Full disclosure. I did not finish the book. I could not finish the book. A clever premise: same people different lives caused by different events. After that, a real yawn. The time period over which the stories take place--growing up in the 1950s in New Jersey and the upper west side of NY--is obviously autobiographical and generally pretty boring. Aunt so and so and uncle so and so and cousin so and so. One is a college professor, another an appliance store owner, and the protagonist is a kid called Archie who goes to camp, makes out with girls, listens to music, reads books--you get the picture; this is my life as a Jewish kid growing up in urban and suburban NY. To make matters worse, Auster has enough of an ego that he thinks he can read his own book to you and probably thinks he reads it well. It kind of like having your uncle Ben read you bedtime stories. I kept on waiting for something to happen and nothing really ever did. One thing I found really annoying is that Auster regularly showed off his knowledge of music and literature by having his characters tick off all the the great composers or poets. We get it Paul, you are very clever. Lots of hype about this book, but cannot understand why.

Really long and really worth it.

The most interesting aspect of this novel was how Auster went back and forth among the four possible life paths that his protagonist might have taken. Eventually, one of the four is prioritized, but only at the end. This points to the contingency of our lives and the ways in which random events can shape them in fundamental ways.

One scene that sticks out--and seems to keep coming back--is when a pre-teen Archie runs out in the middle of a thunderstorm at summer camp to stand under a tree. He does it on impulse but the consequences are enormous.

Takes place over the second half of the 20th century in New Jersey and New York and Paris primarily, so it's also a period piece of the baby boomer generation, the Civil Rights Movement and race riots, Viet Nam......All four story lines were believable and despite all logic, the form was not confusing. I came away with the sense that all four Archies somehow contributed to a whole person.

It was awesome to hear the voice of the writer guiding you through the lives of the Ferguson(s).
His delivery was flat, but clear and never boring.
You end up both identifying and distancing yourself from the character.

Could not put this down!

I fell in love with the characters, and their different iterations. They all sprang to life inside my car while I was driving or when I was walking on the streets. I enjoyed the historical backdrop. I was still very young during the tumultuous late 50’s and 60’s. But I’m aware of how there was so much going on then. All in all a satisfying read and the fact that it was narrated by the author made me feel like he was reading it to me. This alone felt like a treat.