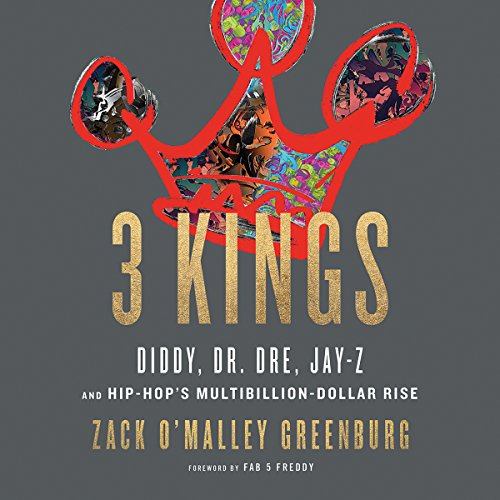 By: Zack O'Malley Greenburg
Narrated by: Matt Amendt
Try for $0.00

Being successful musicians was simply never enough for the three kings of hip-hop. Diddy, Dr. Dre, and Jay-Z lifted themselves from childhood adversity into tycoon territory, amassing levels of fame and wealth that not only outshone all other contemporary hip-hop artists, but with a combined net worth of well over two billion dollars made them the three richest American musicians, period. Yet their fortunes have little to do with selling their own albums: between Diddy's Ciroc vodka, Dre's three billion dollar sale of his Beats headphones to Apple, and Jay-Z's Tidal streaming service and other assets, these artists have transcended pop music fame to become lifestyle icons and moguls.

Hip-hop is no longer just a musical genre; it's become a way of life that encompasses fashion, film, food, drink, sports, electronics, and more - one that has opened new paths to profit and to critical and commercial acclaim. Thanks in large part to the Three Kings - who all started their own record labels and released classic albums before moving on to become multifaceted businessmen - hip-hop has been transformed from a genre spawned in poverty into a truly global multibillion-dollar industry.

These men are the modern embodiment of the American Dream, but their stories as great thinkers and entrepreneurs have yet to be told in full. Based on a decade of reporting, and interviews with more than 100 sources including hip-hop pioneers Russell Simmons and Fab 5 Freddy; new-breed executives like former Def Jam chief Kevin Liles and venture capitalist Troy Carter; and stars from Swizz Beatz to Shaquille O'Neal, 3 Kings tells the fascinating story of the rise and rise of the three most influential musicians in America.

"If Jay-Z, Diddy, and Dr. Dre are shrouded in mystery and inclined towards self-mythologizing, Greenburg does one of the most difficult things a reporter can do: he artfully chronicles their ascent, carefully accounts for their fortunes, and renders moguls as actual flesh and blood mortals. It reaffirms his bona fides as the preeminent journalist covering the business of hip-hop." (Jeff Weiss, author of Biggie vs 2pac)

"I've been blessed to work with Diddy, Jay-Z and Dr. Dre, and let me be honest: 3 Kings gives you the major keys to how the biggest bosses on the planet keep winning." (DJ Khaled, recording artist and entrepreneur)

"A vividly clear depiction of the commercial empires built by Diddy, Jay-Z, and Dr. Dre. The book documents their humble beginnings, their rise to fame and illustrates the important connection to the pioneers who paved the way for their success...an exceptional read." (Rocky Bucano, President of the Universal Hip-Hop Museum)

What listeners say about 3 Kings

I liked the narrator. Most business books have the most boring narrators alive. The book is super current as of March 2018. Worth the expense.

It talks more about hip-hop & rap than just the “3 kings” but an entertaining read never the less.

Would recommend to any musician looking to learn the insides of the show business and the possibilities it offers for artists.

Surprised how much I enjoyed it and learned.

I spend most of my reading on business books. I heard about this book and thought I’d take a little break from my norm for some simple entertaining material. I didn’t get what I expected. I was hooked on 3 Kings from the beginning and burned through it quickly! My biggest surprise was that not only was it entertaining, it was also packed with 3rd person business and personal lessons. Highly recommend.

When you are young and you see a rap video, you want to be those guys. The cars, the parties and the girls. The lifestyle is what you crave. This book gives a much needed perspective of hip hop. Kids need to understand the work ethic and Entrepreneurial mindset of these artist. Talent gets you in, work ethic and a keen sense of business makes you successful. This book really explores this concept. I loved it!

Great read , very interesting and informative. I highly recommend this book . it's about drive

Personally I got this as it was mentioned as an entrepreneurial book. I’ve now listened to the first hour, hoping sooner or later it’ll get to some analysis or successful actions or at least details of these 3 VERY successful business men, but alas it was not to be. The intro mentions that they’re business men, but after that it’s endless minutiae and blow by blow of 70s, then 80s rap history. Interesting in itself and if you’re looking for that, it’s great. But it’s not what I was looking for or why I got this audiobook.

I thoroughly enjoyed the depiction of these three kings. it was wonderfully read and easily understood.

I didnt like when he said the N word. Other than that, it was an excellent discussion on hip hop moguls and their expansion of the culture.

as I'm making www.onecityent.com it made sense from me to learn from the best! now maybe I can get nas hip to my venture!

As an entrepreneur myself and a person that grew up listening to these 3 moguls, I loved the book. This is more motivation for me to open up my own wine business after seeing what Jay-Z and diddy have done.