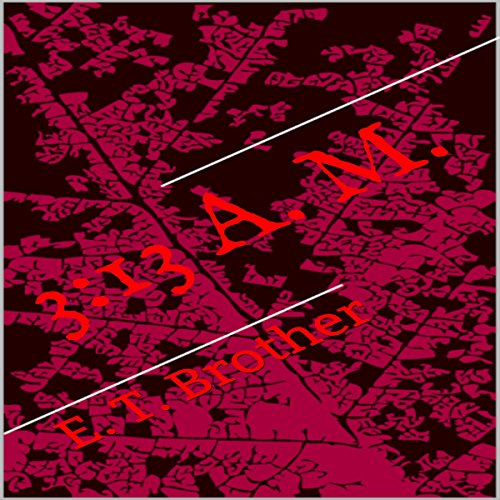 Brian Sutton moves into a new house, with his son Mark. Everything is normal for the first week, then things begin to change for the worse.

Brian wakes at 3:13 a.m., to his son carrying on a conversation with an unknown man. Brian rushes to his son's room, worried someone has broken in, but when he checks the room, his son is asleep in bed. Before Brian can figure out what is going on, the door at the end of the hallway opens up, and his son walks out of the bathroom.

Brian rubs his eyes, then looks back in his son's room. There is no one in bed, no one at all, but the bed isn't empty. There is a creepy clown doll on the bed.

Don't Forget to Say Your Prayers.

The text is slightly repetitive. There are a few mistakes in the beginning. However, this is a truly eerie story. With a single dad, a dead wife and a creepy clown doll, all the elements of a good horror story are here. The performer is good, so don't listen to this before bedtime.

I would listen again. It was a great story. Kept the imagination going. You had a visual of the story in your mind.

Liked the Doll that kept coming back.

The doll came back heard the wet footsteps, the doll was on the wall.

It's a great story. You have an imagination that keeps growing, and the anticipation of what's going to happen next. There's room to have a part 2 to the story.

Okay story but needs a lot of editing

No. The story was very short. It started out good, but then dropped off. The narration had many errors.

Not really. The book had a great horror vibe, especially with each return of the doll, but then the story died. I wish there had been more "meat" to the story.

The narrator had many errors during the first two chapters. At first I thought they were intentional or a mistake in the downloading of the book. But, once they continued I realized that it was due to poor editing. He also read in very choppy sentences. Maybe this was how the book was written? I don't know, but it felt very rushed and rough.

I would like a sequel. Maybe it will be longer and meatier than this one.

Wish I hadn't wasted one of my credits on this book. :(