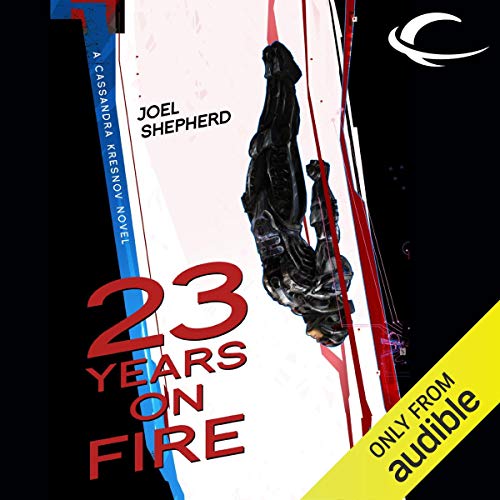 By: Joel Shepherd
Narrated by: Dina Pearlman
Try for $0.00

Cassandra Kresnov - a highly advanced hunter-killer android - returns to face down a rogue government's plot to eliminate free will.

Commander Cassandra Kresnov has her hands full. She must lead an assault against the Federation world of Pyeongwha, where a terrible sociological phenomenon has unleashed hell against the civilian population. Then she faces the threat from a portion of League space known as New Torah, in which a ruthless regime of surviving corporations are building new synthetic soldiers but taking the technology in alarming directions.

On the Torahn world of Pantala, Sandy encounters betrayal, crisis, and conspiracy on a scale previously unimaginable. Most challenging of all, she also meets three young street kids who stir emotions in her she didn't think she was capable of. Can the Federation's most lethal killer afford unexpected sentiment? What will be the cost if she is forced to choose between them and her mission, not only to her cause, but to her soul?

What listeners say about 23 Years on Fire

What made the experience of listening to 23 Years on Fire the most enjoyable?

The story starts very slow to the point you almost want to give up on it. However if you stick with it, the last 25% keeps you listening and in the end, you are reaching so to speak for the the next book...

This is a logical next step in the series story arch. As usual Dina Pearlman gives an excellent performance.. If you like the Kris LongKnike series by Mike Shepperd you will like this one. Though this series is a bit deeper in the philosophical reflection department.

There is political intrigue, ass kicking of bad guys by Sandy and her friends, Ground Battles, philosophical reflection on the nature of man and how technology can change him, and lessons on various current religions and East Asian societies -- reflected into the future.

I enjoyed it and will be listening to this book again.

Editing could have been better

The story is very engaging, but the sudden shifts in perspective (no pause at all when shifting from character to character) became a bit irritating towards the end! Be aware. The new info on GI creation does enter from left field, as well.

story had great potential, though I didn't really find it heaps engaging or exciting. The narrator was great though, she did really well with a different range of accents, though I did find it slightly monotonous at times which made me tune out a bit.