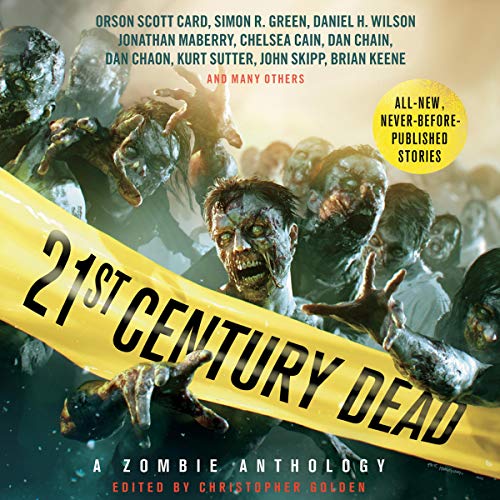 The Stoker Award-winning editor of the acclaimed, eclectic anthology The New Dead returns with 21st Century Dead and an all-new lineup of authors from every corner of the fiction world, shining a dark light on our fascination with tales of death and resurrection - and with zombies!

Would you try another book from the authors and/or the narrators?

Ive listened to quite a few zombie books and this collection is, by far, the worst. Two or three of the entire collection are not too bad. Most are just plain stupid.

Most were very campy in nature.

Take out the stories that had nothing to do with zombie isome of the stories were too dark and morbid. Showed a side of humanity that's not the norm made me feel sick.to my stomache creepy out there

No the stories werw disturbing not entertaining

Most of them did well only a few weren't convincing

Why were there stories that had nothing to do with zombies?

I was eager for the next story...not in a good way

What disappointed you about 21st Century Dead?

Too many stories about zombies living AMONG us. Really? Never got the story all zombie fans like--surviving the madness at the beginning and so on. This is the kind of book that tries to win awards.

Has 21st Century Dead turned you off from other books in this genre?

If you could play editor, what scene or scenes would you have cut from 21st Century Dead?

If I were the editor, I would have asked for different stories.

Orson Scott Card once again shows he knows nothing of religion outside his own. What kind of research does this man do? The first story was creepy and I thought it was going to get even better. It was not to be. Stories about zombies need to have some sort of survival element to them, not just, let's see how weird we can make these stories. I forced myself to finish it, hoping the next story was better. A few were interesting, the father/son story was good, but left you hanging. If you want some weird zombie stories, try it, but otherwise, find another.

I love science fiction and I love zombies. So I am a sucker for this sort of thing and will always purchase such an anthology... But, unfortunately, like a lot of average, not well thought out anthologies, this is a very, very mixed bag.

The introduction tries to put the choice of stories in a context and tie them together, talking about why zombies are so popular in science fiction/horror these days, and based on that it is almost plausible as a thought out compilation, until you have hear a few and realize that there wasn't a lot of thought or screening or discernment put into the selection.

Some are good, some are really bad and some make me wonder how they ever got published. There is a story about a ghost dog and his owner boy, which is anot a bad story (though not great) but it is erally a stretch to see how it is a zombie story at all, thus disproving the premise of a well thought through, connected and crafted compilation of zombie fiction. I believe this book was really just a way to get a group of stories together, most of which are zombie focused but which vary drastically in quality, in order to create and sell a book.

As I said, there are a few fun stories here - that are well written, well performed, fairly original, sometimes funny, sometimes clever, sometimes moving... but these really are the minority. The rest is pretty average or pretty bad stuff... Also, buyer beware, many are not approprite for a younger audience.

The performances, for the most part, are not bad, some are quite good. Scott Brick, of whom I am not a fan, was intolerable to me and in typical fashion was overly dramatic, over the top and completely trumped the story with a performance I am certain was not in keeping with the author's intent, was a major distraction, and made what seemed to be a decent story completely intolerable. But that is me (and many others actually if you google this guy) and I know he has a big fan base, so if you are a fan, this won't bother you. On the whole, aside from that one narrator, the narrators do a pretty good job in my opinion.

Overall, I think I would just say that this is just a random pick and mix bag of stories roughly and loosely connected, and since there really wasn't a lot of thought put into assmbling a top notch mix around a theme, you get a very varied mixture in terms of quality and creativity and originality and even in terms of fit to the defining theme... Some of the stories are worth a listen, some you really should avoid, and some you probably won't even realize when they are over as you became distracted very easily...

There are many better zombie fiction works out there... lots of them, and far better science fiction/horror anthologies. So I would encourage people to look around at options before buying this one. However, if you are like me and have probably already listened to all of these, it isn't the worst, but lower your expectations a bit... Not great but not a complete waste, a very mixed selection.

I love zombie books but...

This is at least one of the worst zombie books I have ever "read" The performance got two stars simply because Sean Renette was one of the readers and I like him a LOT. If you want some really good zombie books read Mark Tufo's Zombie Fallout or a set of books called Zombie Rules. With the exception of the Timothy books I really like all of Mark Tufo's books so you will not go wrong with those, I keep hearing they will be made into a TV show and if they stay close to the books Zombie Fallout will be better than The Walking Dead. Good luck and happy reading.

not a good listen

I don't know this book was hard to follow and not a very good line up of stories. I am hoping I can return it. I thought it would be good because they had a lot of my favorite readers like Shawn runet but the stories reallyl sucked so that didnt' matter.

I don't know but if you like to get into the action of a good Zombie story don't buy this one.

the narator was fine it was the stories that were bad.

I feel like I was tricked out of my credit.

If you could sum up 21st Century Dead in three words, what would they be?

I love the variety of stories and the spin on putting Zombies firmly in the 21st century, sometimes with surprising results. Anyone who is a fan of The Walking Dead will enjoy the spin the writers (and narrators) put on these tales. There's less horror, maybe, but they're still really fun.

There's a variety of narrators, just like there are a variety of writers and they add to the experience by (literally) giving different voices to each tale. It allows you as a listener to more fully separate each storyline, so you can really get immersed in it. Plus, you get a sample of different narrating styles. Not in a brain-eating way, but in an intellectually way.

There's a couple of stories that you feel a certain pathos for the zombies, and that's an unexpected treat. To be reminded that zombies are monsters, yes, but the horror comes from them having been real people with families, hopes, dreams, etc.

This is a great book to listen to while driving or in between listening to longer books since it's a collection of stories. I'd love to hear more like this!

If you're a zombie story lover, this isn't the book for you. There are only a few real zombie stories included in this compilation. The rest are dystopian sci-fi tales with a mere mention of "dead" people. Disappointed.

Someone who was suffering from the same lack of language as a young Helen Keller, and recently miraculously was able to hear for the first time. I'd imagine anything would be wonderful to a person like that.

I understand that in ananthology there are some bad stories mixed with good ones, very rarely do you get one with all the stories done well. In this gem all the stories were awful. If I coud give it lower than 1 star I would.

Meh, they where ok I guess.

If you could play editor, what scene or scenes would you have cut from 21st Century Dead?