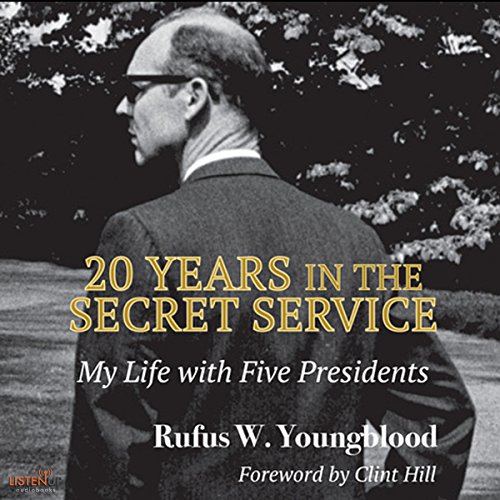 By: Rufus W. Youngblood
Narrated by: Tony Messano
Try for $0.00

When shots rang out in Dallas, Texas, during the tragic assassination of President John F. Kennedy, US Secret Service Agent Rufus W. Youngblood immediately lunged over his seat in the vice president's car and bravely used his body to shield Vice President Lyndon B. Johnson. Faced with the unknown, Youngblood maintained this protective position as their car sped toward Parkland Hospital, following the presidential limousine. Throughout the course of that fateful day, Youngblood vigilantly remained by LBJ's side to ensure his safety.

This candid memoir includes Youngblood's firsthand account of the Kennedy assassination and its aftermath. While highlighting his 20-year career in the Secret Service during which he protected Presidents Truman, Eisenhower, Kennedy, Johnson, and Nixon, Youngblood describes the complexities, risks, and constant tensions involved in protecting America's chief executive. Along with several humorous anecdotes, archival audio inserts enhance this personalized journey through a critical period in American history.

What listeners say about 20 Years in the Secret Service: New Edition

I absolutely loved this book. It gave an interesting perspective of pivotal and infamous events in history. This book was not only interesting and well written but it was very witty. Couldn't stop listening LOVED IT!!!!!

I loved it, Clint Hills forward was a neat perspective of what it was like to be with my grandfather. He really brought out his character. I loved the new preface that was added also, by my Aunt Rebecca. Really cool how you described his reflexes as, "Hercules like Reflexes ." I had read my grandfather's book a few times before and loved the option of listening to it this time. Making this an audible book was a great idea. You really get a good history lesson at the same time and my grandfather makes light of the most difficult situations with a smooth southern dry wit. From Truman unable to resist his urge to, "tickle the ivories," to "people in nudists colonies don't stare." If, you are contemplating reading or listening to it, don't hesitate, you will love it!!!

Such a personal and entertaining perspective!

This audio book offers a great insider's view of some of our country's most historical events! I loved it and found myself sitting in my car after reaching destinations because I didn't want to stop listening! What a remarkable and humble man Rufus Youngblood was! Highly recommend!!!!

Good book, but it need a better reader.

I grew up during the years that Youngblood was in the Secret Service, so I found his story very interesting. The only negative was that the narrator lacks the voice to carry it. Still, it is worth listening to. It just doesn't make we want to get in the car and drive, so I can listen.
I really liked hearing the audio with him and Lyndon Johnson. You can't get that from a print book.

I thought the subject matter and material would be enough to get through 7.5 hours, since this kind of stuff is right up my alley. However, I was wrong. I really really wanted to listen to this and gain some cool insight but the story starts so slow and the narration is just so awful.. just couldn't get very far. I will keep it around and keep trying... sometimes the right mood can make a book better.

Great insight to a noble profession

Good read, great narration. Audio clips really capture the moment and gives a sense of being in the moment.

This personal account was very moving and interesting. I enjoyed learning about history through Mr. Youngblood's account. I admired his actions and appreciated that he underplayed his role in a modest way. It gave me a view into the different presidents and what they were like behind the scenes. It kept my attention throughout. The narrator was great as well. I'm keeping the book to listen to again.

good narration too, well done 👌 we need more people like this to defend our key political figures