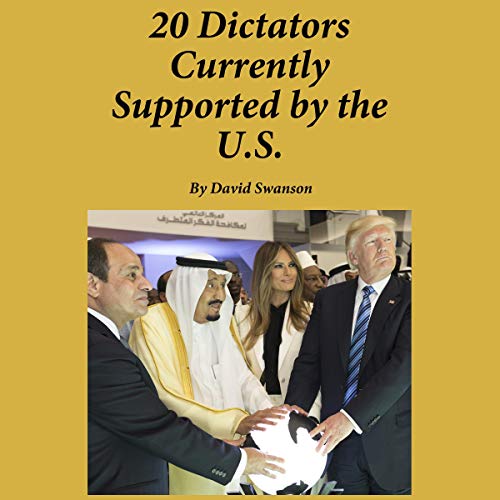 20 Dictators Currently Supported by the U.S.

The US government has a habit of supporting brutal (and comically outrageous) dictators. This book offers 20 current examples, together with some background on historical patterns, some explanation for why this happens, and a proposal to put an end to it.

As documented here, the US government arms, trains, and funds all variety of oppressive governments, not just dictatorships. The choice to focus on dictatorships in this book was not made merely to shorten the list. Rather, that choice was made because the US government so often claims to be opposing dictators through the promotion of democracy. Frequently, the atrocious conduct of a dictator is a central selling point for a new war or coup or program of sanctions.

Yet neither Saddam Hussein’s horrific (though fictional) removal of babies from incubators nor Manuel Noriega’s cavorting in red underwear with prostitutes while snorting cocaine and praying to voodoo gods (as the New York Times solemnly informed us on December 26, 1989) rivals the moral horror or the glorious goofiness of the 20 tyrants described in this book.

What listeners say about 20 Dictators Currently Supported by the U.S.