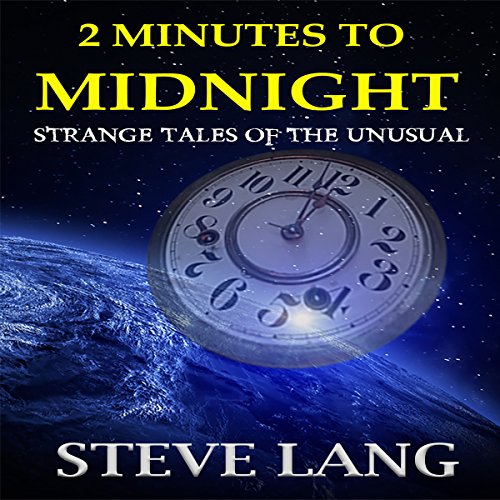 Twenty-six short stories that will amaze you.

Controversial technology, rumored to be in use by a global shadow government, to weave worlds of a fantastic future.

Curiosity Rover discovers a locked door in the side of Mount Sharp, on Mars, and three scientists are sent on a mission to discover what lies within the ancient structure. Will they locate the mysterious libraries of a civilization lost, and survive to tell about their discoveries in "The Mars Tetrahedron"?

When Hell is full of souls, and Satan can take being ignored by his adversary in Heaven no longer, he walks off the job in frustration. Cedric, the demon slayer, will have to set aside his differences with the lord of the flies, and get him back to work before the angels find out he's missing and a final war between good and evil begins in "The Day Satan Quit."

What listeners say about 2 Minutes to Midnight

The stories really jump out at you. You can never tell what's going to be around the next metaphorical turn.

Read this book when it came out. It was great to hear the audio version and give life to the characters. Good book to get lost in.

The writer wrote a story a week for a year. Usually writers will leave most of those stories tucked away in a folder to never see the light of day. But Lang put them all out there. I say more power to him. Even though several of these stories were not so good and most needed a little editor TLC, a handful were really fun. You can tell with practice this writer will get better. The stories are short and very diverse and the narrator is actually really good.

Yes, the story line is great and keep you engage to what's going to happen next.

Monsters and mayhem at the end of the world.

What did you love best about 2 Minutes to Midnight?

Steve Lang gives us a view of his collection of alternate universes and possible futures.

What was one of the most memorable moments of 2 Minutes to Midnight?

The anthology always kept surprising me with twists and turns.

What does John Pirhalla bring to the story that you wouldn’t experience if you just read the book?

John Pirhalla rounds out the characters and keeps pulling the listener into the stories.

Macabre Look Into the World of Sci-Fi

What made the experience of listening to 2 Minutes to Midnight the most enjoyable?

Unexpected plot twists. No character is sacred in Lang's stories. All are expendable.

Satan. That he would have job dissatisfaction and 'walk off the job.' That the other characters would recognize the necessity of the dark entity's existence.

The stories in this audio book are twisted but inventive. Lang's words paint the perfect picture of his intent. He makes each story vivid and alive for the reader/listener. I'd recommend this audio book to anyone looking for a true escape into the unknown. I look forward to what he comes up with next.

I enjoyed listening to this audio book and feel that as Lang continues to write he will improve. The stories are inventive, strange, and many of them are a lot of fun. The mixture of science fiction and fantasy was great, and I may take this audio book with me, on my next camping trip, to listen to around the camp fire with my family.

I've listened to hundreds of hours of audio books and so far Steve Lang is right up there at the top. Very nicely done!!

While this audio book is a lot of fun, it really thrives in its ability to represent something greater than what's happening in the text, or in your headphones in this case. Whatever your interpretation of the text might be, you'll probably be able to derive something from Lang's ability to think about the scope of humanity as a whole through the parables presented in the audiobook.

Whether you pick out themes about the environment, or the general critique of morality, you'll find something deeper if you look for it. That's the beauty of these simple stories, which are more complex in ideology than you might realize.

I'd love to see Lang do something a little bigger though. His ability to condense might help him write novels that can really reach bigger ideas. I would imagine his approach to character development is different in his full-length novels and that the ideas presented in them are less like little sparks and more like flames.