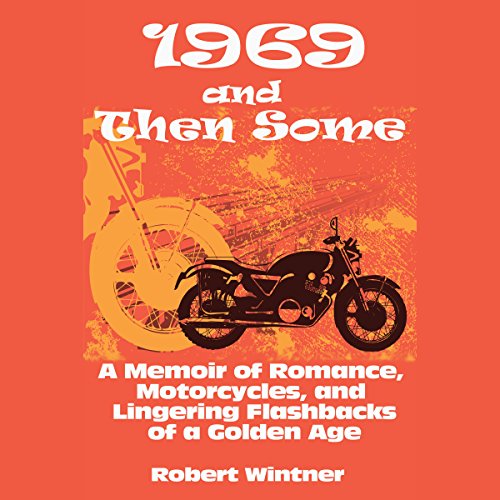 A Memoir of Romance, Motorcycles, and Lingering Flashbacks of a Golden Age
By: Robert Wintner
Narrated by: Robin Bloodworth
Length: 10 hrs and 30 mins
Categories: Bios & Memoirs, Personal Memoirs
5 out of 5 stars 4.8 (5 ratings)

The year when everything needed to be experienced and tried, when innocence was tempted, played, and lost.

1969 was that pivotal year for the baby boomers. Young and innocent, they were given the ultimate freedoms and were faced with growing up. This touching, hilarious memoir is the true story of a late '60s grand tour of Europe a life-defining parable, for those who remember and for those who can’t. Never before and not since have a handful of seasons so exquisitely defined the difference between right and wrong. With the gift of youth they saw, sensed, and savored the laughably clear distinction between profit motive and greed, between truth and propaganda, between national interest and defense contractors, between a lovely cloud of smoke and the smoke of napalm, and between the phantoms of security and the dangers of complacency and atrophy.

Stoned to the gills and then some, these adventurers saw and felt and knew things that no generation before did. Some fully engaged in the counterculture while others merely observed, sticking a left foot in, pulling a left foot out, but not quite jumping to the full hokeypokey.

It was an incredible time of self-discovery, of love, and of finding out what you were made of.

I didn't get all of it but I was entertained!

This memoir follows the author on his European motorcycle adventure when he is in his early 20s, through his college days, and then his earliest attempts to make a living as a magazine writer and then a real estate handler. It’s nitty gritty, the author not holding back ever on recounting his decisions and life path.

I recently read another book by this author (Brainstorm) and it wasn’t a good fit for me. However, this book was absolutely fascinating and I was a little sad when it came to an end. There’s lots of drug culture and counter culture stuff going on in this book. I don’t get all of it, and I don’t agree with all of it. However, it was so very different from my own life that I was swiftly caught up in the tale. The author became this main character that I sometimes rooted for and sometimes I wanted to kick. I became attached to the story line and was very curious to see how things would turn out.

The first big chunk of the book covers the author’s European motorcycle trip. There’s plenty of drugs, interesting male characters, and women who the author is interested in. He’s exploring life in general, seeing the sites on a dime and meeting interesting people. In listening to this section, I really felt that the author remembers this time with great fondness.

After some few months, the author returns home. The Vietnam war is in full swing and being drafted into it is a very real thing. So, he goes to college to get that draft deferment. Again, there are plenty of drugs, alcohol, and women. In general, college was a joke. Students aimed for a middle grade C in order to stay in college, and perhaps earn a degree eventually. The author and most of his friends didn’t take college seriously. There’s almost a fatalistic feel to this section of the book, like no matter what they do, sooner or later they will be swept up into one of three things: death by drugs & alcohol, the war machine, or the much slower death of conformity.

Eventually, the author has to get proactive about dodging the Vietnam draft. These endeavors take him on road trips across the country, and also mental trips of physical degradation. Both wore him down. After this section, the time line of the tale speeds up. Years or decades go by as the author talks about what jobs he was willing to do once the fear of being drafted had passed. He also keeps tabs on a few friends, goes on a few more motorcycle rides, has a few stints in the hospital, and in general, ages.

Here’s one of my few criticisms of the book. Nearly all the ladies mentioned are merely sex objects. The author’s mom, who has a small role at the beginning of the book, and again near the end is one exception. Also, an old flame nicknamed Betty Boop has a recurring role in the tale, though most of those encounters center around her sex appeal. Late in the book, the author’s wife Rachel (who played a pivotal role in Brainstorm) is mentioned a few times. The book started off with the 20 something year old author and so I could understand raging hormones and all at that during that time of life. However, the ladies never seem to matter much more even as the author ages.

There’s tons of drug culture stuff in this book, which I found fascinating. The author speaks often of how the drug use was a way to expand the mind and become a little closer with the universe, etc. I didn’t really get this. Of course, I had to wonder how small the user’s mind was to begin with, and then I wondered what these ‘enlightened’ folks did with the expanded minds. While both questions went unanswered, I found it very interesting how they repeatedly told themselves this, like it was a justification. Perhaps for some it was. Perhaps for others, it was exactly what they said it was – an expansion of their reality.

This goes hand in hand with the need to not conform, ever. That seemed to be a driving force in the author’s life and definitely added some interesting aspects to the story. First off, there was a whole generation of people who decided they would not conform…. so that kind of created a new branch conformity. Having a standard 8-5 job with benefits was something of a death knell to these folks. It was very fascinating to watch them work so hard to avoid this conformity, and to keep enjoying drugs, alcohol, and free sex. Indeed, I didn’t get chunks of this book, and I don’t agree with all the philosophies woven through the narrative. Nevertheless, it was a fascinating look into someone else’s life. In the end, I simply enjoyed the ride.

I received a copy of this audiobook at no cost as part of the iReads Book Tour in exchange for an honest review.

The Narration: Robin Bloodworth did a great job with the narration. He had a variety of regional and European accents for the tale. Also, his character voices were all distinct. His female voices were believable. He imbued the story with emotion as needed and I really liked how he brought the author’s memoir to life.