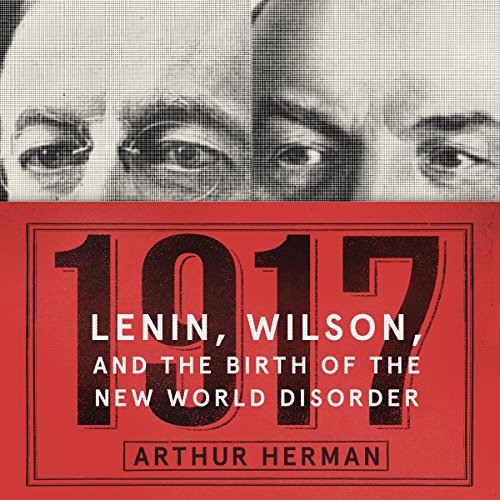 By: Arthur Herman
Narrated by: Stefan Rudnicki
Try for $0.00

This is the story of two men and the two decisions that transformed world history in a single tumultuous year, 1917: Wilson's entry into World War I and Lenin's Bolshevik Revolution.

In April 1917, Woodrow Wilson, champion of American democracy but also segregation, advocate for free trade and a new world order based on freedom and justice, thrust the United States into World War I in order to make the "world safe for democracy" - only to see his dreams for a liberal international system dissolve into chaos, bloodshed, and betrayal.

That October, Vladimir Lenin, Communist revolutionary and advocate for class war and "dictatorship of the proletariat", would overthrow Russia's earlier democratic revolution that had toppled the all-power czar, all in the name of liberating humanity - and instead would set up the most repressive totalitarian regime in history, the Soviet Union.

In this incisive, fast-paced history, New York Times best-selling author Arthur Herman brilliantly reveals how Lenin and Wilson rewrote the rules of modern geopolitics. Through the end of World War I, countries marched into war only to increase or protect their national interests. After World War I, countries began going to war over ideas. Together, Lenin and Wilson unleashed the disruptive ideologies that would sweep the world, from nationalism and globalism to Communism and terrorism, and that continue to shape our world today.

Our New World Disorder is the legacy left by Wilson and Lenin and their visions of the perfectibility of man. One hundred years later, we still sit on the powder keg they first set the detonator to through war and revolution.

What listeners say about 1917

WW1 is a war that often gets passed over in discussions as it is considered complicated and tedious. However, when it is presented with excellent eloquence as the defining moment of the 20th century, one finds it easier to proceed. Such is the case with this book.

If nothing else, the contrary biographical sections on Wilson and Lenin, two Utopians whose actions and/or inactions were simply the detonators to WW2 and the Cold War, are worth everyone’s attention.

As in the case of any great history book, a story is presented but not without some balance, and while those suspicious of socialism and communism will find this a good reminder of why, even those leaning Left would do themselves a world of good learning about these events that get “skimmed” over or polished about in a typical history class.

Nothing short of magnificent

A tutorial of what not to do. Should be a must listen for all who love freedom!

I sure hope many would learn from this book

Basically the lesson in this book is both Lenin and Wilson demonized their opponents, instead debating on the merits of their arguments. This led to millions of people dead around the world. I hope that the young adults today don't get caught in this old trap, some already did. Tell youth to read this book.

A fascinating look into a year that changed the course of history, and the two men whose decisions shaped it.

I like a number of his books (cave & the light, Ghandi & Churchill, to rule the waves are all pretty great), but this one misses the mark....it’s scattershot & the underlying thesis is...meh

Stories Behind Mistakes Of Legends Of This Time

Excellent reading. I've always wondered why WWI Treaty of Paris and the stumbling of the changes in Russia led to the certainty of WWII. Read this and you will understand.

Great book describing situation in the world today. Could Wilson have stopped the rise of communist Russia? Great argument for it in the book.#WWI #ColdWar #Wilson #Lenin #Leagueofnations #tagsgiving #sweepstakes

This was a really great listen. Kept me engaged the whole way through, the narrator was very well spoken, and all together, this book builds a solid base for understanding events of the past which effect us today. Would be a great read for both scholars and novice readers who are interested in finding out about US-Russian historical relations.

a sobering look at disintegrating idols.

For those whose idea of history starts with their first birthday this is recommended highly.

The author has a well reasoned argument. The road to hell is paved with good intentions. Idealism without objectivity, openness to the ideas of others, and the ability to share, can lead to disaster.
The author still holds with the notion that if we learn from history, we may not be condemned to repeat old mistakes. It is revealing that one of his final quotes comes from Henry Kissinger, one of the great practitioners of Realpolitik in modern times.
While the author concludes with allusions to Donald Trump, and addresses the issue of Americas leadership role in the world, I was surprised that he did not mention the parallel between Lenin’s demagoguery and Trump’s, and the disaster that is almost inevitable when people are divided by their leaders in this way.
This book raises many questions and was very thoughtful about the way leaders respond to events and how they take advantage of, or lose opportunities.
Ultimately, as members of a democracy, I feel that we the people should not allow our leaders to lead us in ways with which we do not agree. Wilson did have a idealistic, but democratic notion, in having a “spot election” of Senators, based upon their vote on his league of Nations concept. I think, had it been possible, Wilson would have been surprised and disappointed with the result of such "spot elections".
However, unless we change our constitution, and take advantage of technology, to make law and direct policy by referendum, in a quick and secure fashion, instead of by representative government, we will NOT be running this nation by referendum, so we must put pressure on our leaders to TRULY represent us, to do OUR will, not their will.

Save me from the exceptional...

In 1917, the USA finally entered World War I after years of pusillanimous dithering, and Russia threw its revolution after years of poverty and imperialist wars. In this book, Herman looks at the two men who led those events, Woodrow Wilson and Vladimir Lenin, and suggests that out of their respective philosophies of power grew the 20th century and all of its horrors.

Normally, when reviewing a major history book, I find that even though I might not like the style or may feel the author hasn’t entirely convinced me with his or her arguments, I still feel at the end that I have gained enough from reading it to have made it worthwhile. Sadly, this is the exception. I have thoroughly enjoyed each of Arthur Herman’s books which I’ve read to date. He is often biased, but usually openly, so that I feel the reader can allow for his bias in forming her own judgements. Here, however, his bias seeps into every analysis he makes and it seems as if he’s perhaps not even aware of it. American capitalism is good, Russian communism is bad. Wilson is an idealist, Lenin is a cynic. America is a shining beacon on the hill, the USSR is a blot on the escutcheon of history. I realise these are standard viewpoints on the other side of the Atlantic, and some parts of them would be accepted over here too, though perhaps less so after the last couple of years. But a history book with this level of bias teaches nothing, except perhaps that history should never be written by those with a dogmatic belief in the superiority of one particular nation or form of government.

It’s not that Herman is uncritical of Wilson and America – in fact, sometimes he’s almost sneeringly contemptuous of Wilson. It’s more in the language he uses. Some of his statements are simplistic and unnuanced in the extreme, and his facts are carefully selected to support his basic argument that both Wilson and Lenin were more interested in forcing their worldview on the rest of the world than in acting in their own nations’ self-interest. He speaks of “American exceptionalism” with a straight face, clearly believing the propaganda which has done so much damage in convincing so many Americans (but not many other people) that they are somehow intrinsically superior to other races, nations, etc. And yet this is exactly the kind of propaganda he condemns in his despised USSR. His conclusion, broadly summarised, is that everything bad in the 20th century comes from Russia, while America could have done better in the world, but did pretty well. An arguable stance, and I’d have appreciated an argument about it rather than it being presented as if it were an indisputable statement of fact.

Please don’t think I’m an apologist for the extreme communism of the USSR, nor the horrors carried out in its name. But nor am I an apologist for the extreme capitalism of the USA, complete with its own murky history of horrors. Unfortunately Mr Herman is, and appears to believe that America must stay engaged with the world to save it by exporting its form of capitalism to the rest of us. Personally, I think the world needs to be saved from all nations who think they have the right to force their views on other people and from all extremists who believe they are “exceptional” in any way. I find it difficult to recommend this one – the overwhelming weight of bias prevents it from adding any real insight into the subject.