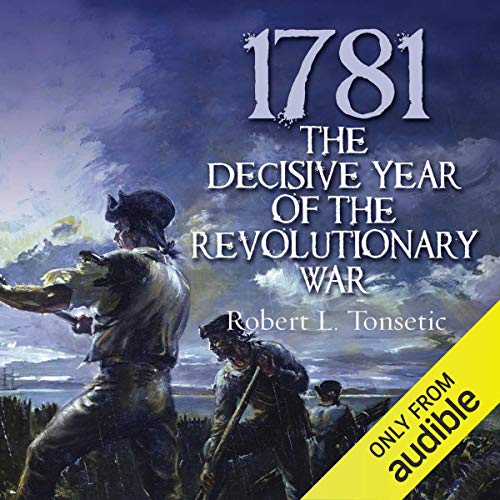 By: Robert Tonsetic
Narrated by: Noah Michael Levine
Try for $0.00

The Treaty of Paris, in 1783, formally ended the American Revolutionary War, but it was the pivotal campaigns and battles of 1781 that decided the final outcome. 1781 was one of those rare years in American history when the future of the nation hung by a thread, and only the fortitude, determination, and sacrifice of its leaders and citizenry ensured its survival. By 1781, America had been at war with the world's strongest empire for six years with no end in sight. British troops occupied key coastal cities, from New York to Savannah, and the Royal Navy prowled the waters off the American coast. The remaining Patriot forces hunkered down in the hinterland, making battle only at opportunities when British columns ventured near.

But after several harsh winters and the failure of the nascent government to adequately supply the troops, the American army was fast approaching the breaking point. The number of Continental soldiers had shrunk to less than 10,000, and the three-year enlistments of many of those remaining were about to expire. Mutinies began to emerge in George Washington's ranks, and it was only the arrival of French troops that provided a ray of hope for the American cause.

In a shift of strategy, the British began to prioritize the south. After shattering the American army under Horatio Gates at Camden, South Carolina, the British army, under Lord Cornwallis, appeared unstoppable, and was poised to regain the Carolinas, Georgia, and Virginia for the Crown. However, when General Nathaniel Greene arrived to take command of Patriot forces in the South, he was able to gradually turn the tables. By dividing his own forces, he forced the British to divide theirs, dissipating their juggernaut and forcing Cornwallis to confront a veritable hydra of resistance.

1781 was a year of battles, as the Patriot Morgan defeated the notorious Tarleton and his Loyal legion at Cowpens. Then Greene suffered defeat at Guilford Courthouse, only to rally his forces and continue to fight on. While luring Cornwallis north, Greene was able to gather new strength and launch a counterattack, until it was Cornwallis who felt compelled to seek succor in Virginia. He marched his main army to Yorktown on the Peninsula, upon which the French fleet, the British fleet, Greene, Washington, and the French army under Rochambeau all converged. On October 19, 1781, Cornwallis surrendered his weary and bloodied army.

In this audiobook, Robert Tonsetic provides a detailed analysis of the key battles and campaigns of 1781, supported by numerous eyewitness accounts from privates to generals in the American, French, and British armies. He also describes the diplomatic efforts underway in Europe during 1781, as well as the Continental Congress's actions to resolve the immense financial, supply, and personnel problems involved in maintaining an effective fighting army in the field.

What listeners say about 1781

Would you consider the audio edition of 1781 to be better than the print version?

Who would you have cast as narrator instead of Noah Michael Levine?

Someone who could Google how to pronounce place names.

When you get the gig to narrate a book, seems like the first thing to do would be to look up how to pronounce names. This guy gets them all wrong, from Banastre Tarleton, to the Pacolet River, to Gloucester. The last one drove me insane, because much of the last third of the book concerns York and Gloucester. It's really not that hard, folks.

Really needed a heavier hand with the editing. The prose became tedious at times, lacking in variety of sentence structure and phrasing. Repetitive at times in substance as well. I also didn't feel as it was bringing much new material to the table.

Narrator continuously mispronounced military terms, author made some factual errors of detail. Overall a good story that covers an important time, but it really helps to be familiar with the back story and 18th Century Warfare.

Loved this book. Kept my interest peaked throughout. The readers voice was good. Great History and storyline.

Need to learn to pronounce Gloucester.

Gloucester is pronounced the same in England, MA and VA; Glaw (as in awful) ster.

Well written history - grabs your attention from the very beginning to the very end.

The combination of personal stories and historical facts was very well done. The writing flowed like a novel. I found the epilogue fascinating.

Really enjoyed this book as it gives a rather detailed look at the strategy and tactics of the last battles of the revolution.
An easy read that I would highly recommend to any enthusiast of the war of independence